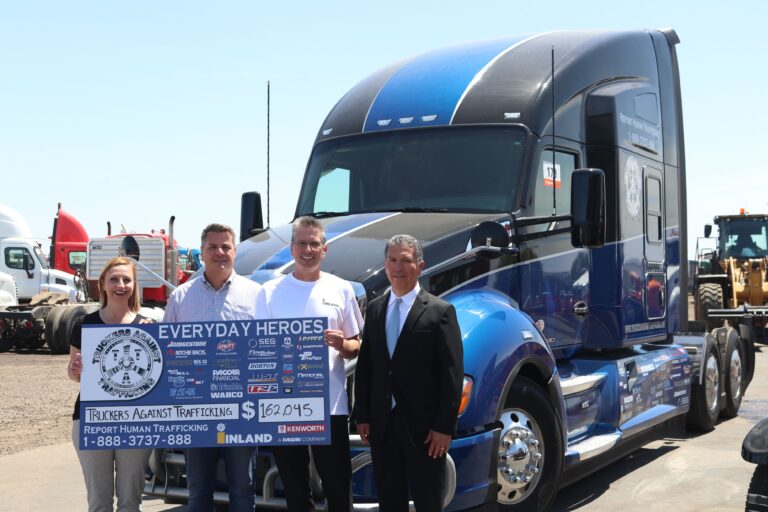 PHOENIX — The “Everyday Heroes” Kenworth T680 was auctioned recently at Ritchie Bros. in Phoenix with the winning bid submitted by Collin Stewart, president of Stewart Transport, which helped net $162,000 in support of Truckers Against Trafficking (TAT).

TAT is the 501(c)(3) nonprofit is dedicated to stopping human trafficking by educating, mobilizing, and empowering the nation’s truck drivers and rest stop employees.

Stewart Transport is a Phoenix-based company specializes in delivering refrigerated and dry van freight and is a longtime supporter of TAT and its mission to end human trafficking.

Stewart attended and placed the winning bid at the live auction. For Stewart, it was hard to pass up the opportunity to place a bid on a truck that supports an organization he believes in so strongly.

“The Everyday Heroes Kenworth T680 auction was a fantastic success, thanks to our incredible sponsors, who generously donated parts and money to build this special truck,” said Don Blake, new-truck sales manager at Inland Kenworth-Phoenix, TAT board member, and driving force behind this year’s auction. “Two years ago, our first Everyday Heroes Kenworth T680 auction netted $83,000 for Truckers Against Trafficking and served as a stepping-stone to increase the trucking industry’s awareness of human trafficking. That effort helped us to achieve this year’s even larger donation.”

The $162,000 donation nearly doubled the previous donation TAT received from the previous Everyday Heroes Kenworth T680 auction, making it the largest one-time gift in the organization’s history, according to Kendis Paris, TAT executive director. “We are so grateful to have Collin and Stewart Transport submit the winning bid. Not only will Collin’s generous purchase help us fund our programs, but they obtain a high-performing Kenworth T680 that will serve as a great addition to its fleet,” Paris said.

The Everyday Heroes Kenworth T680 is fully loaded with a 76-inch sleeper, and features the PACCAR Powertrain with a PACCAR MX-13 485-hp engine, PACCAR 12-speed automated transmission, and PACCAR 40K tandem rear axles. According to Stewart, the company’s new Kenworth T680 will join a fleet of more than 100 trucks and will be utilized in the Western region of the United States.

“The industry again showed its generosity by coming together to support TAT and its important work. The funds will be used to expand our work within the trucking industry, and further our partnerships with law enforcement, additional modes of transportation and multiple countries, in the fight against human trafficking,” Paris said. “Special thanks to Kenworth and Ritchie Bros., as well as all of our amazing sponsors. And, I can’t say enough about Don Blake’s contributions to TAT. This major fundraising project required a tremendous amount of time and effort, and illustrates his dedication to our cause.”

According to Kurt Swihart, Kenworth marketing director, Blake’s dedication to TAT and the ultimate goal of ending human trafficking is admirable. “Don is an excellent example of making a difference by putting his heart into something he cares about,” said Swihart. “He had the idea to auction off an Everyday Heroes Kenworth T680 two years ago, and it’s great for Kenworth to help him do it again this year. He is truly an inspiration to all of us, and an excellent representative of Inland Kenworth and the Kenworth dealer network. This auction showed how the industry can pull together to make a difference and support the fight against human trafficking.”

Human trafficking is an industry estimated to be worth $32 billion in the United States alone, and $150 billion globally, according to Truckers Against Trafficking. To further its education, TAT operates the Freedom Driver’s Project – a mobile exhibit, which educates members of the trucking industry.