Drivers might not be surprised to see a pair of dogs in a trucker’s cab, but there is more than meets the eye in the cab of Sarah Giles, an over-the-road truck driver with All Freight Carriers. Nestled in the TV niche of the sleeper is a custom cage filled with four parakeets.

The birds, who are all three to four months old, have ridden with Giles for about two months. They are named Sam, Dean, Castiel and Bobby after characters on the TV show, “Supernatural,” and Giles said their personalities match their namesakes.

The birds have a fitting home in the 2019 T680 Kenworth. In addition to the custom cage, their play area includes ladders, rings and other toys. The parakeets’ wings are clipped so they cannot fly around the cab, and Giles has secured any items that could shift and hurt the birds when the truck moves.

To ensure their well-being, Giles provides a heater, an air filter and an emergency kit stocked with medical items such as blood-stopping powder, anti-stress supplements, antibiotics and vitamins.

Also traveling in Giles’ cab are two dogs. Kermit, a 13-pound miniature Australian Shepherd, has been on the road with her for five years, and Grizzly, a Rottweiler/pit bull mix of about 100 pounds, has been on the truck for four years.

“They’re trained ranch dogs. They’re used to dealing with small animals and small birds, so they don’t bother them,” she said. “The birds are not in any of the dogs’ space. The birds don’t take up any of the dogs’ attention, so it all works.”

She added that she plans to keep the parakeets with her for the long haul.

“They do have a nice big cage set up for them at home, just in case I had to leave them there, but they really just like the truck a lot better,” she added.

Giles’ Texas ranch is home to a herd of goats, two donkeys, two livestock dogs, a flock of Ancona and mini call ducks, countless chickens and a couple of cats — and she plans to continue expanding her menagerie. Her mother watches the ranch while Giles is on the road in the northeastern U.S. for a month at a time.

“I could give you a long list of weird chicken breeds [I want] that you’d never hear of again, and I would love to get back into doing cattle eventually, but that’s probably in about 20 years,” Giles said. “I love them all, and eventually I’ll probably have them all.”

Her interest in quality breeds of chickens and ducks, many of which cannot be shipped, has led her to use her truck as a nursery for chicks and ducklings. Pet policy is a top priority when it comes to choosing an employer, she said, adding that even her two dogs are not permitted at many companies. All Freight’s pet policy allowed her to procure the parakeets.

“I’ve always wanted some but obviously never even thought about it because I’ve been driving a truck, but since I’ve been with this company, they know I have a ranch,” she said. “So, I was in the store one day and was watching these two little parakeets and thought, ‘Let’s give this a shot.’”

She said she enjoys the birds’ “funny little habits,” such playing king of the hill by fighting over the highest spot in the play area.

“It’s like having toddlers with feathers,” she added. “They really are just happy little bundles of feathers.”

The birds sing and chirp throughout the day. Like true Texas birds, they enjoy country music, especially bouncy tunes by Trace Adkins and Toby Keith, Giles said. When she is having a bad day, she added, she plays their favorite song, “We’re from the Country” by Tracy Byrd. She needs the mood boost provided by the birds, she added, because she got them near the two-year anniversary of her husband’s death.

“Depression and loneliness is something every single trucker fights with, no matter who they are or how long they’ve been out here,” she said. “It’s all just a mind game to keep yourself going and keep yourself sane, and cute little fluffy birds that tear apart all their toys and throw fits if you give them the wrong seeds are pretty good at it.”

The dogs are also a comfort on stressful days, she said, and they provide security, as well. Giles added that she would recommend pets to any trucker.

“I know I couldn’t do it without them,” she said. “When you’re just so frustrated and having such a bad day, sometimes it’s just really nice to look at something that’s cute and loves you, and to just take care of [someone] besides yourself.”

Sarah DeClerk is a multiskilled journalist who specializes in features writing. She has written articles for The Trucker, The Arkansas Democrat-Gazette, Arkansas Flag and Banner’s Brave magazine and the University of Arkansas at Little Rock Forum. She earned her bachelor’s degree in mass communication from UA-Little Rock in 2013. She has been a board member of the Arkansas Society of Professional Journalists since 2017 and currently serves as chapter president. Her interests include hiking, traveling and the arts. 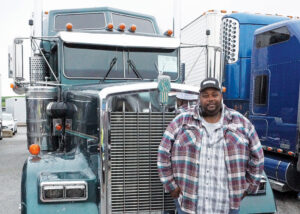 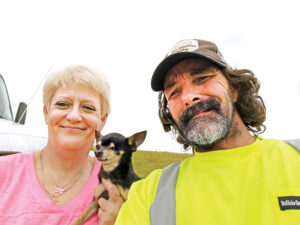 It seems tha Sarah Giles is a tough woman who’s found good friends with her animals. More people should do the same because animals can make better friends than humans somtimes. I hope she gets her cattle.