“We all live a journey.” This is Dawson Taylor’s philosophy on life.

Most people’s journeys do not shift quite as remarkably as Taylor’s. Along the way, trucking has made all the difference in his life.

At 54, Taylor is an earnest man with a hearty laugh and a respectful demeanor. He tries to do the right thing — but this was not always the case.

Taylor said he chose a rough path as a young adult and admittedly made ill-advised choices. He was into partying, and decided to drop out of high school.

“I was just being stupid,” said Taylor of his behavior at the time. Taylor’s father, a recovering alcoholic himself, had been attempting to redirect his son’s path.

Eventually, those efforts hit an impasse, and Taylor was kicked out of the family home.

At one point, Taylor’s older brother, James H. “Jimmy” Taylor Jr., took him in. Jimmy was a trucker, and Dawson went everywhere Jimmy went. This meant joining Jimmy on his rig.

“He wasn’t (just) my brother. He was my best friend” Dawson said, adding that he “sowed his wild oats” under Jimmy’s watchful eyes.

“If it wasn’t for him doing what he was doing, I don’t know what I would be right now,” Dawson said.

Dawson started out working with his brother as a “bedbugger” (a slang term for movers at the time). Things were still not tranquil for Dawson, but they were looking up, and he found joy in his new career.

“We poked fun. We made jokes. One time, we rolled (Jimmy) up in a mattress and put furniture on top of him,” Dawson said with a chuckle.

After three years of riding alongside Jimmy, Dawson got his own CDL.

He also started taking his father’s advice. Dawson’s father recommended that he finish his education and find a career before getting married and having a family.

“That was playtime. Now this is adult time,” said Dawson of the transition.

Five years later, he progressed from working with his brother to driving solo over the road. That career has endured for 32 years, and Dawson says there’s no end in sight.

Everything was rolling right along … then tragedy struck.

Dawson lost Jimmy — his best friend and brother — about 15 years ago because of complications during open heart surgery. Dawson served as one of the pallbearers at Jimmy’s funeral. Later, Dawson’s father died.

Despite these heartbreaking losses, Dawson continued his life’s journey as a trucker. About eight years ago, he started driving for Pro Transport, where he found a surrogate father.

“He reminds me so much of my daddy, it’s almost like talking to (him),” Dawson explained, adding that he’s grateful to have found Pro Transport.

“It’s a shame I didn’t find them earlier,” said Taylor. “I love where I work.”

Dawson keeps a plaque in his rig dedicated to his father, his brother and his mentor at Pro Transport.

Dawson leases his 2020 Freightliner Cascadia, nicknamed “Roll of the Dice,” from Pro Transport.

In July 2021, Dawson drove the rig to the Walcott Truckers Jamboree at Iowa 80 in Walcott, Iowa. At one point in the competition, he shared, he began to feel discouraged. In his book, Freightliners typically don’t take home prizes. He almost left before the event ended.

“I actually thought about packing up and leaving. I really did,” he said. He stayed, however, and that perseverance earned him three awards.

“That just shows you: Don’t give up,” he said, adding that for him, the event was not about winning, and that the Truckers Jamboree was a great learning experience.

Before he went out with his next load, he dropped off his awards for display at Pro Transport.

“They’re just as much their trophies as they are mine,” Dawson noted.

Though Dawson loves what he does, his greatest love is for his family.

At one point, Dawson’s wife, Bobbie, joined him on the road after obtaining her CDL.

“We ran teams for a little over a year,” he said, adding that Bobbie left trucking after an accident in Amarillo, Texas. “She got beat up pretty bad (in the accident) and has PTSD. (But) everything (happens) for a reason.”

Taylor returns his wife’s love and kindness with faithfulness. His “rough” days are behind him.

Throughout his life’s journey, Taylor admits, he has made mistakes. However, he tries to use each misstep as learning experiences.

This is one piece of advice that anyone can follow. 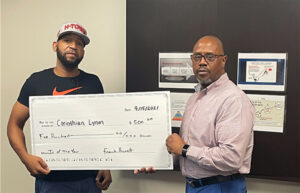 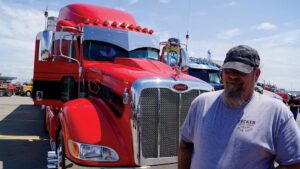 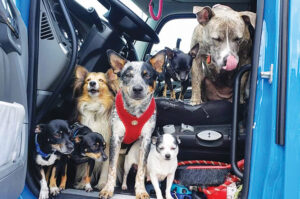