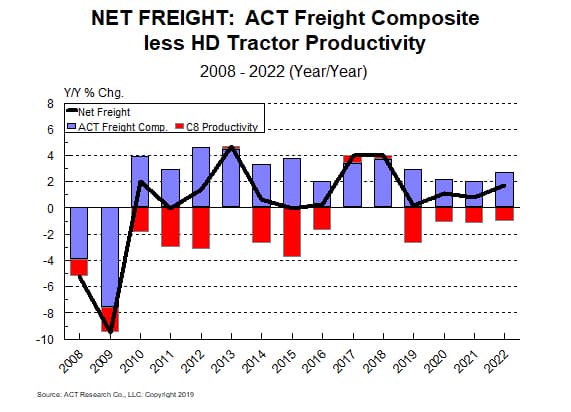 COLUMBUS, Ind. — Since early 2018, ACT Research’s forecasts have called for the up-cycle in the Class 8 market to run out of steam around the third quarter of 2019, according to ACT’s latest release of the North American Commercial Vehicle OUTLOOK.

The N.A. CV OUTLOOK is a robust report that forecasts the future of the commercial vehicle industry, looking at the next one to five years with the objective of giving OEMs, Tier 1 and Tier 2 suppliers, and the investment community the information they need for planning in a deeply cyclical industry.

The report provides a complete overview of North American CV markets, taking a deep dive into relevant demand drivers, pivoting on current market activity (from orders and backlogs to production and sales), before arriving at unit forecasts for different CV vehicle classes. Information included in this report covers medium and heavy-duty trucks/tractors, and trailers, the macroeconomies of the U.S., Canada, and Mexico, information on carrier profitability trends, freight and intermodal considerations, and regulatory environment impacts.

“Over the past couple of quarters, we have been beating the drum loudly so that our customers could be as well positioned as possible for when the downturn in industry activity inevitably occurred,” said Kenny Vieth, ACT’s president and senior analyst. “Starting around six weeks ago, we began to see announcements of staffing reductions and plant shutdowns from OEMs, as well as from major tier-one suppliers. Anecdotes suggest the lower tiers on the supply chain have experienced production volumes cuts since early in September.”

Regarding heavy vehicle demand, Vieth said two metrics of note this month were the continued pull down of the Class 8 backlogs, owing to ongoing order weakness, and a fourth consecutive month of record new truck inventories.

“From a net freight perspective (freight less productivity), growth falls from 4% in 2018 to 0.2% in 2019, as productivity has risen with a vengeance in response to the sharp run-up in freight rates in 2018,” he said.

Regarding ACT’s medium duty forecasts, Vieth said, “In the near term (2019), there remains a bit of upward pressure on production, though it started abating in July. Based on the accumulation of inventory, we expect further slowing in medium duty build as the year progresses, a sentiment echoed by recent OEM layoff and production curtailment announcements.”