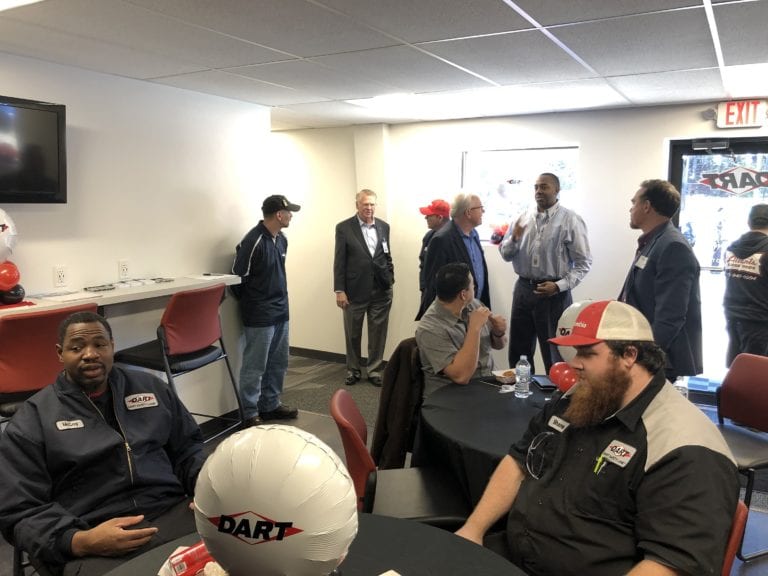 The facility here is located close to Hartsfield-Jackson International Airport south of Atlanta and it will provide the company with the opportunity to grow its customer base in the state and region.

Prior to opening the doors in Ellenwood, Dart operated from a location in Buford northeast of Atlanta.

Along with its strategic new positioning in the metro area, the Ellenwood Operating Center is larger than the previous Buford location and Dart has incorporated the latest in amenities for owner-operators and company drivers in the Dart Network.

“Trucking and logistics have become the bread and butter for Clayton County, particularly because we have four interstates going through the county. Dart has a national presence, and to have them here will be great for Clayton County,” said county Chamber of Commerce President Jeremy Stratton, one of the dignitaries attending Dart’s open house event. “I have had the opportunity to visit a number of truck facilities over the years, and I am very impressed with what I’ve seen here at Dart. The attention to detail in terms of the layout, the technology and the amenities — giving the employees what they need — is awesome. They have obviously put a lot of thought into the plans, and the finished product has turned out well. This will be a great place to work for a lot of people.”

“We began this project about 15 months ago. It’s awesome to see it today with everyone here, especially when you think back on how everything has come together,” said Dart Vice President of Maintenance Brett Wacker, who oversaw the company’s development of the Ellenwood Operating Center. “We built this with our people in mind. We wanted to provide a nice, comfortable facility, with good amenities and plenty of space. It’s been great to see people’s reactions as you go through the building.”

Wacker was part of the company’s executive leadership that made the trip to Ellenwood from Dart’s corporate headquarters in the Twin Cities. Chairman of the Board Donald Oren and President James Langley led the visiting group. In addition to touring the new facility, Oren and Langley spent time with the office staff, shop technicians, owner-operators and company drivers in Ellenwood.

“The facility is very impressive, and I give Brett Wacker a lot of credit. He made the decisions on how to lay things out here, and that’s really important because it has to be efficient and it has to be safe for the people who work here,” Oren said. “It was a great event. It’s always fun to meet the drivers and spend time with everyone here. There’s always something to learn.”

Dart is a cheap company.I was there 25 Years and was pushed to the bottom of the OTR pay scale because your pay is based on your home zip code ? 87120 got me 1.08 where a driver living in St Louis would get 1.12 even though you run everywhere. Glad to be gone no respect from managers either!