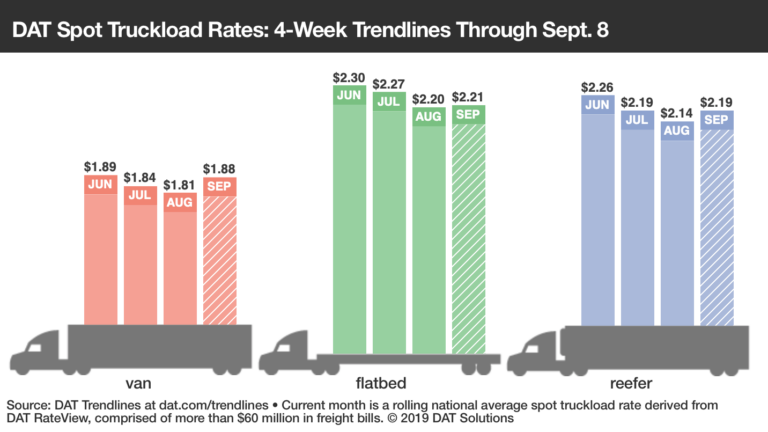 PORTLAND, Ore. — A strong close to the month of August continued into September as spot truckload rates increased during the week ending September 8, said DAT Solutions, which operates the industry’s largest network of load boards.

The number of posted van, refrigerated, and flatbed loads from September 2-8, which included Labor Day, fell 7% compared to the previous week while the number of available trucks declined 12%. Declines of 20% are more typical for a shorter workweek.

Hurricane Dorian altered supply chains, with rates and volumes rising on many lanes into and out of coastal areas. Because the worst of the storm missed heavily populated areas in the United States, the effects on transportation thankfully were not as severe as originally forecast.

Indeed, the spot van rate is currently equal to February 2018 levels after nearly seven month of declines, and rates on 68 of DAT’s Top 100 biggest van lanes by volume were higher compared to the previous week.

Other markets saw higher levels of freight for a holiday-shortened week, including Chicago; McAllen, Texas; and Stockton, California, part of the Sacramento market. Elizabeth, New Jersey, to Boston saw the average rate rise 42 cents to $4.36 per mile as the possibility of Dorian hitting New England late in the week fueled demand.