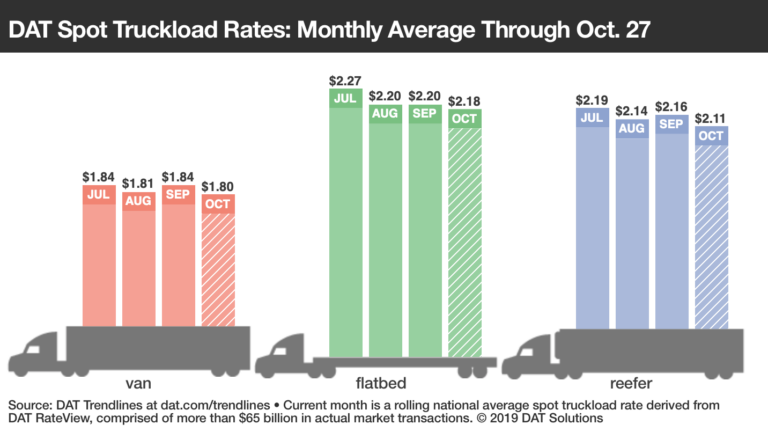 Spot van rates were higher on just 32 of DAT’s Top 100 largest van lanes by volume. While most markets were softer in terms of shipper demand for trucks, the number of van loads out of Los Angeles increased 8% and the outbound rate gained 2 cents to an average of $2.18 per mile. The load-to-truck ratio there touched 5.2 last Friday, a positive turn for carriers and perhaps a sign of better days ahead for fourth quarter imports.

Where rates were up: After Los Angeles, it’s a short list of markets where rates increased last week. Seattle, up 1 cent to $1.61 per mile, improved on last week’s modest gain, and Denver rose a penny to $1.19 per mile. While truckers would welcome higher rates, Seattle and Denver are perennial low-priced markets with sub-national-average outbound rates. On the downside, Columbus, Ohio, fell 1 cent to $2.08 per mile and is down 5% over the past four weeks. Lanes to watch:

Spot flatbed rates have been slipping all month and the national average load-to-truck ratio has declined from nearly 15:1 during the first week of October to 9:1 last week.

Where rates were up: Phoenix, Tampa, Florida, and Harrisburg, Pennsylvania, may be on different sections of the map but they all had one thing in common: higher spot flatbed volumes. Loads from Harrisburg increased 6% compared to the previous week while Tampa and Phoenix gained roughly 4%. Lanes to watch:

For information go to www.dat.com/Trendlines.