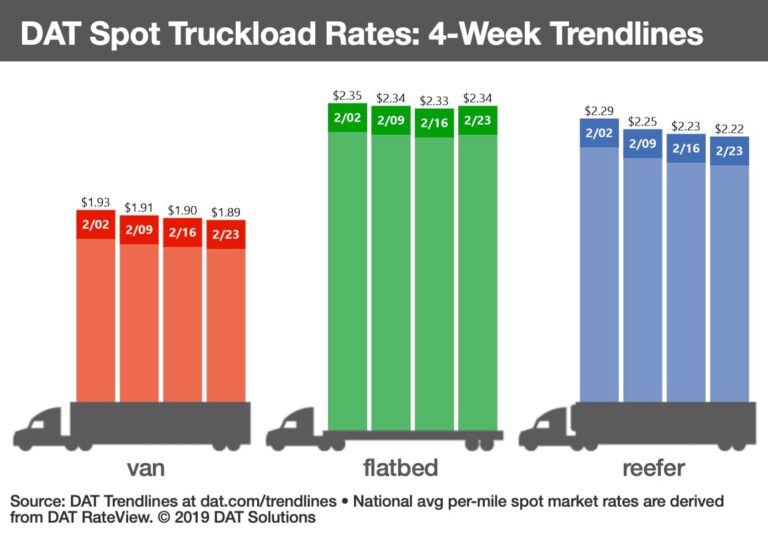 While the overall number of loads posted on the DAT network fell 6 percent and truck posts were up 3 percent during the week ending February 23, February van volumes to date are almost 10 percent higher year over year. Van rates weakened nationally but remained constant in core lanes from top markets, another signal that pricing is starting to firm up. And diesel prices, which are a component of spot rates, are holding in the $2.97 to $3 per gallon range recently after a four-month, 40-cent slide.

The number of van load posts was down 6 percent compared to the previous week and truck posts were up 4 percent.

Average spot van rates are 3.6 percent lower compared to January and down 10.6 percent from February 2018. Of the top 100 van lanes by volume, pricing fell on 64 lanes.

While the national average rates suggest an “off” market for van freight, volume jumped 13.3 percent from January to February, the biggest increase between the two months in the past four years. Ocean freight should start to hit U.S. shores in advance of the Spring retail season, and with the next round of tariffs postponed we may see at least the normal seasonal uplift.

Strong volumes and stable rates on key individual lanes continue to suggest that spot van rates are bottoming out.

The number of flatbed load posts fell 5 percent and truck posts were up 2 percent.

Despite lower demand for flatbed capacity, the national average spot flatbed rate made its first upswing in six weeks.

The number of reefer load posts was down 5 percent and truck posts were up 1 percent.

Among the top 72 reefer lanes last week, rates on 26 lanes were up, 44 lanes were lower, and two were neutral. Los Angeles and McAllen, Texas, both saw a rebound in reefer freight volumes but losses elsewhere help push spot rates lower for the fifth straight week. Volumes in this segment have fallen 3.1 percent in the last month.