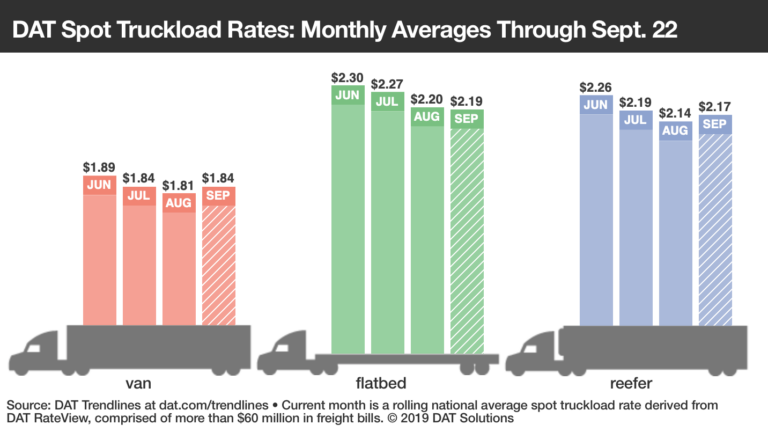 Spot truckload freight activity slowed for the week ending September 22 as Tropical Storm Imelda brought severe rain and flooding to Houston and disrupted supply chains across the South and Midwest, according to the DAT Spot Market Summary, released Thursday.

The summary is a weekly spot-rate snapshot is derived from DAT RateView, which provides real-time reports on spot market and contract rates, as well as historical rate and capacity trends. The RateView database is composed of more than $65 billion in annualized freight payments. DAT load boards average 1.2 million load searches per business day.

The price of diesel, meanwhile, shot up 9 cents to $3.08 per gallon as a national average.

National average spot rates for September (through Sept. 22) were as follows:

According to DAT, the van load-to-truck ratio averaged 2.1, down from 2.4 the previous week. Spot van rates were higher on 41 of DAT’s Top 100 largest van lanes by volume, with few notable price swings.

As noted, weather played a large part in van spot rates in various parts of the country. In Denver, van rates increased 6 cents to an average of $1.24 per mile. Rates were higher from Denver to Houston ($1.30 per mile, up 12 cents) and other markets like Oklahoma City that generally use Houston-based businesses in their supply chains. Suppliers in Denver helped pick up the slack.

Meanwhile, as the effects of Hurricane Dorian continue to fade, demand for trucks fell in the Southeast. Atlanta to Charlotte dropped 17 cents to $2.21 per mile, and Atlanta to Miami fell 13 cents to $2.54 per mile

Rates were up in the Upper Midwest, as tree-fruit harvests continued to generate volume. Grand Rapids, Michigan, to Madison, Wisconsin, rose 26 cents to an average of $3.07 per mile. The return trip paid $3.55 per mile — for an average of $3.31 per mile for the 662-mile round trip between the two markets.

Pumpkin season in Albuquerque, New Mexico, created opportunities for both van and reefer haulers. The van load-to-truck ratio there hit 15 to 1, with more than 2,400 loads available; the reefer ratio was 37 to 1 with more than 2,500 available loads.