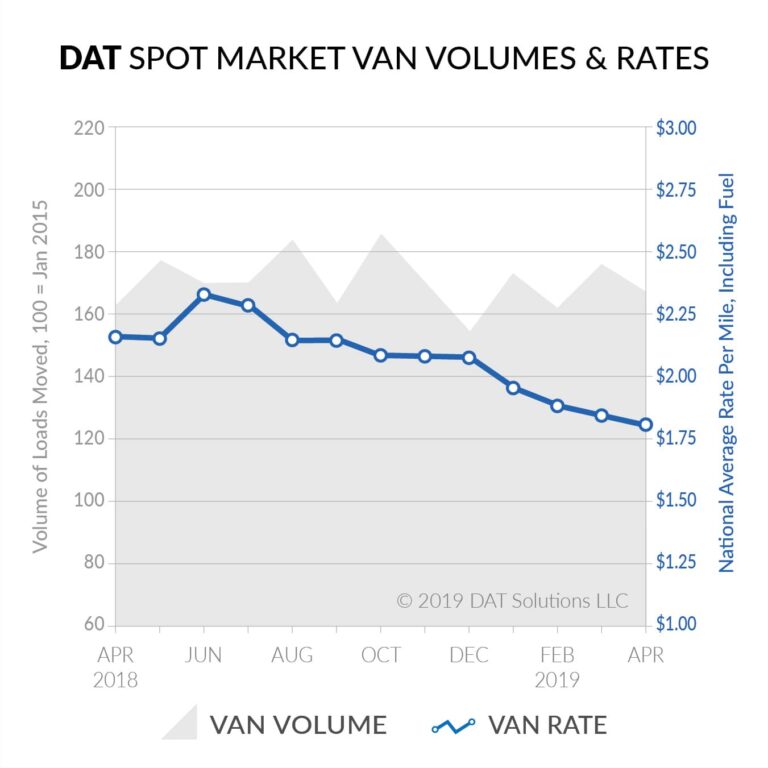 PORTLAND, Ore. — Spot market truckload freight continued two trends in April that have been a recurring theme in 2019: strong volumes and abundant capacity.

Volumes for dry van freight — the most common semi-trailer type — increased 2.4 percent in April 2019 compared to April 2018, according to DAT Solutions, operator of the largest truckload freight marketplace in North America. Some spot market service providers are growing rapidly this year, and that growth offsets losses in other sectors. Despite the sustained volume, the national average spot van rate fell 35 cents per mile year over year due to readily available truckload capacity.

Month-over-month trends followed a familiar seasonal pattern. The DAT Truckload Freight Volume Index declined 5% for van freight in April compared to March, and the national average spot rate of $1.81 per mile was 4 cents lower. These seasonal declines mirror three of the past five years.

“Spring came late to the spot market this year,” said DAT Senior Industry Analyst Mark Montague. “Late-season snowstorms in Minnesota and Colorado, as well as flood-related damage in and around Nebraska, led to delays in truck and rail traffic.”

A delay in spring produce also contributed to a decline in demand for refrigerated equipment, with refrigerated volumes down 11 percent in April compared to March. That’s not a typical seasonal trend for April, and the volume shortfall was accompanied by a 2-cent drop in the average spot rate for reefer freight, to $2.15 per mile. On a year-over-year basis, reefer volume slipped 2.9 percent, and the national average rate dropped 28 cents per mile.

Flatbed load volume remained strong in April, losing only 0.9 percent, as rates edged down by 1 cent compared to March, to $2.33 per mile. Year over year, flatbeds hauled 9.1 percent more loads for 31 cents less per mile.

“Overall freight availability remained high in April compared to recent years, despite the small seasonal decline,” Montague said. “As we head into peak season for spot market freight, we expect regional capacity shortages to emerge and boost rates higher through the end of the second quarter.”

The DAT Truckload Freight Volume Index is based on load counts and per-mile rates recorded in DAT RateView, with an average of 3 million freight moves per month. Spot market information is based on transactions arranged by third-party logistics (3PL) companies, while contract volumes and rates are arranged between shippers and carriers, with no intermediary.