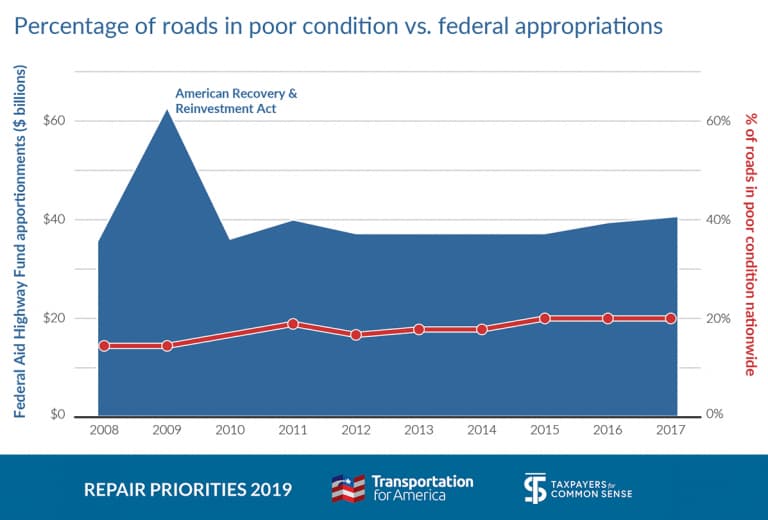 WASHINGTON — Repair Priorities 2019, a new report released Tuesday morning by Transportation for America and Taxpayers for Common Sense, shows that, despite more spending, the percentage of the roads nationwide in “poor condition” increased from 14 percent to 20 percent from 2009-2017.

The report said this is happening because states are neglecting basic repair in favor of expanding their roads. Given increasing spending flexibility by Congress over the last two long-term transportation reauthorizations, states spent nearly as much money expanding their road networks as they did repairing their existing roads ($120 billion spent building new lane-miles from 2009 to 2014).

Arizona, Indiana, Mississippi, Nevada, North Carolina, Texas and Utah all devoted more than 45 percent of their available highway capital funds to road expansion between 2009 and 2014.  Even with billions in spending devoted to repair nationally, 37 states saw an increase in the percentage of roads in poor condition between 2009 and 2017.

“Whether during debate over an infrastructure bill or the long-term reauthorization looming next year, the rhetoric I hear over and over again from Capitol Hill and the White House about the need to invest more money in transportation is all about ‘repairing our crumbling roads and bridges.’ But our spending priorities rarely match this oft-repeated rhetoric,” said Beth Osborne, director of Transportation for America.

“A look at the numbers from the Federal Highway Administration in Repair Priorities makes it clear that we can scarcely afford to maintain the roads we have, let alone the new roads we keep adding to the system. While a handful of states are doing an admirable job putting their money where their mouth is by devoting the bulk of their federal dollars to repair, many other states are spending vastly more on expanding their roads or building new ones— creating new liabilities in the process—even as their existing system falls into disrepair.”

“Lawmakers and officials like a good ribbon cutting at a new road, but repair is too often treated like flossing teeth: A tedious, sometimes painful extra step that’s all too easily skipped. Except that it’s critical and saves taxpayers cash and pain down the road,” said Steve Ellis, executive vice president of Taxpayers for Common Sense. “Instead of sending blank checks to the states, federal taxpayers deserve to have some assurances that their tax dollars will be spent effectively and efficiently on the highest priority projects, which in most cases is taking care of what we already have.”

It’s unclear if the U.S. could even afford to maintain all the roads that built, even if it devoted all available capital dollars toward repair. Repair Priorities estimates that we would need to spend more than $231 billion per year just to keep our existing road network in acceptable repair and bring the backlog of roads in poor condition into good repair over a six-year period (the typical length of a federal transportation reauthorization).  By comparison, all highway capital expenditures across all government units in 2015 totaled just $105.4 billion, only a portion of which goes to repair.

The latest available data shows states have made some improvement in their spending since the first edition of Repair Priorities in 2011, but states are still spending just as much on road expansion as road repair. States spent $21.4 billion on average on road repair annually between 2009-2014 and $21.3 billion annually on road expansion.

When states devote money to expanding their roads, it doesn’t just redirect funds away from repair and maintenance; it also continually expands our overall annual spending need. We built enough new lane miles from 2009-2017 to criss-cross the width of America 83 times, requiring an additional $5 billion per year just to keep those new roads in good condition. That’s more than Tennessee, Mississippi, Alabama, Georgia, Louisiana, and Arkansas receive combined in federal highway apportionments every single year.

So what will it take to fix the system?

Transportation for America and Taxpayers for Common Sense provide four concrete recommendations for Congress to consider in any infrastructure package they consider, including the upcoming 2020 federal transportation bill. Congress should: guarantee measurable outcomes for American taxpayers with any new funding, require that states repair their existing systems before expanding, require project sponsors to demonstrate that they can afford to maintain new roadway capacity projects, and track progress and require that FHWA publish results.

Repair Priorities 2019 provides a national snapshot and state-by-state evaluation of current roadway pavement conditions, spending trends, and unmet needs. It also recommends crucial actions federal policymakers should take in the next transportation reauthorization bill to get the nation’s roads—and spending priorities—back on track.

The full report and state-by-state findings are available at http://t4america.org/maps-tools/repair-priorities.