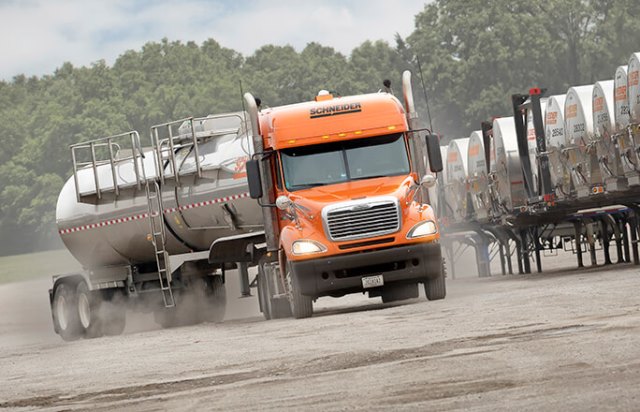 They achieved this by adopting a variety of fuel-efficiency technologies, according to the 2018 Annual Fleet Fuel Study released by the North American Council for Freight Efficiency (NACFE).

Combined, these fleets reached an average fuel economy of 7.28 mpg compared to the average U.S. fleet number of 5.91 mpg, marking a 2 percent increase over 2017 and representing a return to the 2 percent eight-year average gain.

The report contains the results of a deep-dive investigation into the adoption of various products and practices for improving freight efficiency among 20 major North American fleets. This is the sixth annual update of the 2012 inaugural study, which has been described as an important read for anyone working on improving fuel efficiency.

“I look forward to this report and read it each year within days of it being published. It is important to Schneider’s efforts and it can be a critical resource to any fleet or owner-operators as well as manufacturers and others who are working to improve Class 8 efficiency,” said Rob Reich, senior vice president, equipment, maintenance and driver development at Schneider.

“Each year the report has been published, it has been NACFE’s most downloaded report,” said Mike Roeth, NACFE executive director. “The findings of this report should prove invaluable to efforts to improve fuel economy.”

The overall adoption rate for the 85 technologies studied in the report has grown from 17 percent in 2003 to 44 percent in 2017.

Not all technologies could be applied to a single tractor-trailer, as some are clearly an either-or decision.

For 2018 study, the technologies were kept consistent with the 2017 study.

In 2016, many new technologies were added to the survey as technology developers brought new choices to the fleets for purchase.

The largest gainers in adoption by these fleets, when comparing their purchases in 2017 to those in 2016, occurred with the following technologies:

For the first time since the study’s inception, the NACFE team sought data from other organizations involved in Class 8 tractor-trailer efficiency. Data was received from ATBS, NPTC and FleetAdvantage, and compared to the NACFE results. All four studies show a solid increase in fuel efficiency over the past eight years.

Data is critical and NACFE helping the industry with real-world information that fleets can use to take action. Learn more at www.nacfe.org.