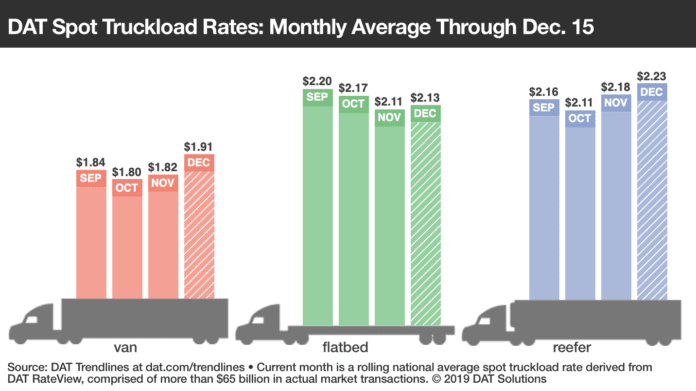 PORTLAND, Ore. — Trucks are busy in these final weeks before the holidays. Spot van freight volumes were up more than 25% during the week ending December 15 and the national average spot van rate for December is $1.91 per mile, 9 cents higher than November, reported DAT Solutions, which operates the industry’s largest electronic marketplace for truckload freight.

The average van rate increased on 26 of DAT’s top 100 van lanes by volume. Forty-three lanes were lower and 31 stayed the same. The national average van load-to-truck ratio declined from 4.0 during the previous week to 2.9, meaning there were 2.9 available loads for every truck posted on the DAT network. That’s higher that the average ratio in November (2.3) and October (1.7).

Outbound freight volume rose steadily on 89 of the top 100 lanes, and the abundance of loads has helped keep rates high. Rate increases were concentrated in markets and lanes associated with retail freight, including:

At the national level, reefer rates are not backing away from pre-Thanksgiving highs.

The national average spot reefer rate in December is $2.23 per mile, 5 cents higher than the November average. The load-to-truck ratio fell from 7.4 to 4.9. Rates rose on high-volume lanes out of Elizabeth, New Jersey, home to the largest seaport on the East Coast, a sign of high demand to move imported produce. McAllen, Texas, also had rising rates due to imports.

This weekly spot-rate snapshot is derived from DAT RateView, which provides real-time reports on spot market and contract rates, as well as historical rate and capacity trends.

The RateView database is comprised of more than $68 billion in annualized freight payments. www.dat.com/trendlines