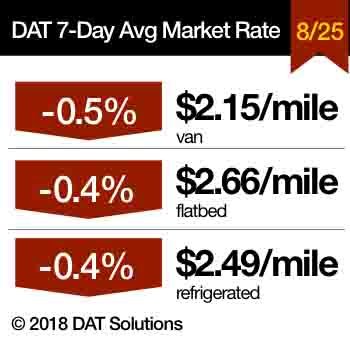 While national van rates have slipped in August, the 100 most active van lanes on DAT load boards are showing signs of recovery. Forty-five lanes were up in pricing, 46 lanes down, and 9 were neutral.

Van markets in Texas and the Southeast region are slipping, and nowhere has the trend been more evident than in Houston ($1.95/mile, down 6 cents). A slowdown in energy-related freight may be part of the story; also, one year after Hurricane Harvey hit the region, much of the recovery and rebuilding is complete.

The run-up to Labor Day weekend and the new school year typically leads to a surge in demand for transportation of fresh food. This year, the back-to-school grocery fest coincides with late-summer harvests: apples, pears, onions, and potatoes are rolling out of orchards and fields in the Upper Midwest, Pacific Northwest and parts of the Northeast.

FLATBED TRENDS: After 10 weeks of declines, the national flatbed load-to-truck ratio edged up 3 percent last week to 28.2 loads per truck. Load posts were up 1 percent while truck posts dipped 2 percent. More lanes rose than fell last week in the top 78 flatbed lanes, and overall rates continued to slip but at a slower rate.

All four of the top-gaining flatbed lanes were from Roanoke, Virginia, an indication of activity through East Coast ports.

For the latest spot market load availability and rate information, visit www.dat.com/trendlines and join the conversation on Twitter with @LoadBoards.