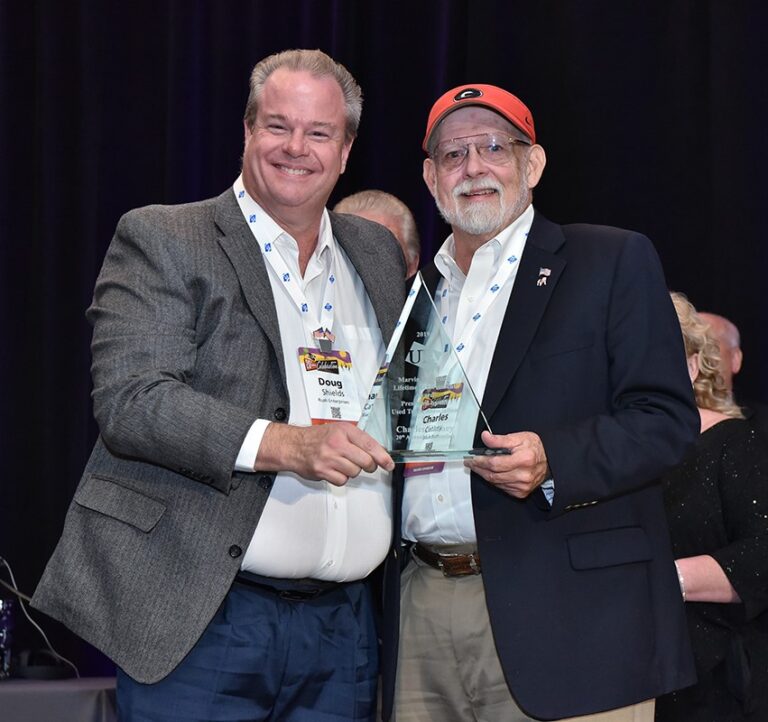 STOCKBRIDGE, Ga. — The Used Truck Association has awarded its Marvin F. Gordon Lifetime Achievement Award to Charles Cathey for a career that has spanned more than 48 years.

Just recently retired, Cathey remains an active and vital part of the UTA membership, and he continues to support and mentor the group’s younger members.

He received this honor at the association’s annual convention held November 6-9 in Indian Wells, California.

Starting his career in 1971 when he joined Nalley Motor Trucks of Atlanta, Cathey admits he had a lot to learn.

“I had never driven a truck larger than a half-ton pickup,” he recalled. It was in this early position that Charles first developed his career-long habit of “basically working all the time.” He sold his first truck, a 1970 Chevrolet C65 for $6,900, including tax. “Today a new engine costs more than that,” he said.

Over the course of his long career, Cathey also worked for Vanguard Truck Center of Atlanta and sold Mercedes-Benz cars for a time.

In the early 1990s, he switched from truck sales to truck leasing, spending 11 years with Lease-Plan before he joined Black Book for the last 14 years of his career.

With such a long and varied working career, Cathey admits he’s had a lot of fun and many interesting experiences.

Among the most exciting of these was the time he spent working with Universal Studios on the production of their 1976 hit movie “Smokey and the Bandit.” His job was to round up most of the trucks used in the movie.

“Hanging out with Burt Reynolds, Sally Field, Jerry Reed, Jackie Gleason and Dom DeLuise was more than a blast,” Cathey said. He also worked with NASCAR and the PGA Tour to provide the trucks they needed for transporting equipment to their various tour locations and races.

These opportunities left him with several years of “pit passes” for the Daytona races and the chance to play one of the first rounds of golf at TPC Sawgrass.

Cathey has served on the UTA board of directors, and he continues to be active in the organization, serving as a mentor and role model for a younger generation of truck professionals. He looks forward to spending his retirement years devoted to his family and the association he helped to build.