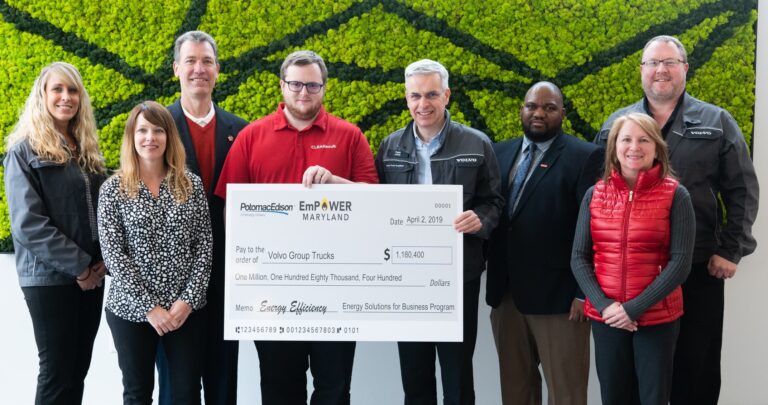 GREENSBORO, N.C. — The Volvo Group’s Hagerstown powertrain manufacturing facility received $1,180,400 in rebate incentives from Potomac Edison for a number of energy efficiency upgrades made at the site since 2016, which has saved the equivalent of 9,158,862 kilowatt-hours of electricity, enough to power 759 average homes for a full year.

“Becoming more energy efficient is part of our DNA here in Hagerstown, and it is incredible to see our progress in recent years,” said Pierre Jenny, Volvo Group vice president of powertrain production. “We are proud to work together with Potomac Edison to cut our energy usage and in turn reduce our environmental footprint.”

Jenny said since 2016, the Hagerstown facility has upgraded plant lighting to more efficient LED lights. More than 2,700 inefficient fixtures have been replaced with highly efficient LED fixtures and lighting controls.

The facility also upgraded equipment used to manufacture engine crankshafts, including crankshaft grinding machines that require less energy. New induction hardening equipment, which is used to heat the crankshafts to optimize their hardness during the production process, was also installed and not only reduces energy consumption, but also delivers faster heating and reduced cycle times.

The rebates are part of the EmPOWER Maryland energy efficiency program that offers rebates to Maryland-based commercial and residential customers that upgrade to more energy-efficient equipment. A one-time rebate is awarded to the customer to offset the cost of the upgrades they have completed at their residence or business.

“Potomac Edison is committed to helping organizations make a meaningful impact on the environment through energy efficiency,” said Todd Kirkpatrick, manager of commercial and industrial energy efficiency programs for FirstEnergy. “The energy savings accumulated by the Hagerstown facility since 2016 are substantial, and we are pleased to have played a role in making it a reality.”

Jenny said the Volvo Group’s Hagerstown facility has been working to improve its energy efficiency for a number of years. In 2014, the site was named a U.S. Department of Energy (DOE) Superior Energy Performance Platinum-Certified Partner, the highest level in the program. The Hagerstown facility also participates in the DOE’s Better Buildings, Better Plants program, which has a target to reduce energy intensity by 25 percent over a 10-year period. In 2015, the site installed a 1.3 megawatt, 5,000-panel parking lot solar canopy, one of the largest solar canopies on the U.S. East Coast. The site also installed a 2.2 megawatt ground mount solar array in 2016.