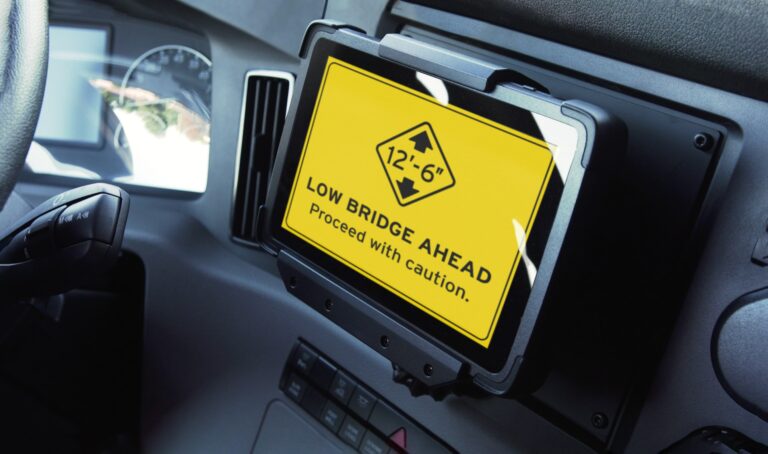 The new service, currently being offered for free to subscribers of the Drivewyze PreClear weigh station bypass service, provides alerts when a Drivewyze-enabled truck approaches a high-rollover area, plus it alerts drivers to upcoming low bridges. An audible tone, as well as visual alert, provides the warning. The new service, which is now active nationwide, is being rolled out this month throughout the Drivewyze ELD reseller partner network.

“These are two great safety features we’ve integrated into Drivewyze’s Safety Notifications service, and it’s just the start – we will have more safety notifications to come,” said Brian Heath, president and CEO of Drivewyze. “Our rollover alerts, on targeted exit ramps and curves, are geo-fenced at 500 locations in 32 states. We worked closely with our state partners to identify the areas that had higher incidences of rollovers, so our alerts offer an early warning to drivers to check their speed. A 2017 FMCSA showcased the problem with more than 14,000 truck rollover crashes, which lead to 170 fatalities. Many of those were preventable. Drivewyze Safety Notifications service alerts will help make an impact in slowing down trucks on dangerous curves; it’s the only such alert in the industry, and we’re pleased to be offering it to our customers.”

According to Heath, this is an example of the private sector working with state agencies to improve safety on the roadways. “The Drivewyze Safety Notifications service is the largest in-cab safety alert system in the industry. It will make a difference and help reduce rollovers and bridge strikes – it’s a huge safety advancement for the trucking industry, which will benefit all motorists.”

The rollover alerts were tested extensively in a pilot program with several large Drivewyze customers. “What we found was that when the alerts were used, there was a measurable slow down in the risk area, and a 17% reduction in speeding incidents around those same curves,” he said. “That’s exactly what we wanted to see – the alerts had an impact on driver behavior. There is really no room for error with big rigs cornering on overpasses, especially in bad weather. Our internal studies have shown that ‘over speeders’ — going 5 mph over the posted speed limit around curves — are twice as likely to be in a preventable road accident as a driver going the speed limit. Once our customers activate the safety notification product on Drivewyze, its drivers will receive a ‘heads up’ about a 1,000 feet before the corner, to get them zeroed in on what’s coming up.”

For the low bridge warnings, Heath said Drivewyze identified 1,500 strike-prone bridges along routes that are commonly used by truckers, and geo-fenced them for alerts. “The latest data (2014) from the Department of Transportation showed more than 4,200 bridge strikes in that year alone,” said Heath. “And those are not only totally preventable and embarrassing, they can be expensive. Repairs to trailers average around $10,000 – not including cargo damage – and the owner of the vehicle is on the hook for any bridge repair, which can be well over $100,000, plus penalties/fines up to $11,000 by the DOT.”

Like with the rollover notification alert, an audible and visual notification is provided by Drivewyze when the truck approaches a low clearance bridge that is geo-fenced in Drivewyze’s system. “It’s an extra safeguard for truckers and especially useful for drivers making a delivery on an unfamiliar route,” Heath said.

“This is a terrific service that Drivewyze is offering,” said Jorge A. Chavez, safety director from Trancasa. “Weigh station bypass makes us more productive, while the Drivewyze Safety Notifications service will now help our drivers become safer behind the wheel. The name of the game in trucking is productivity and safety – Drivewyze has become a great partner in both.”