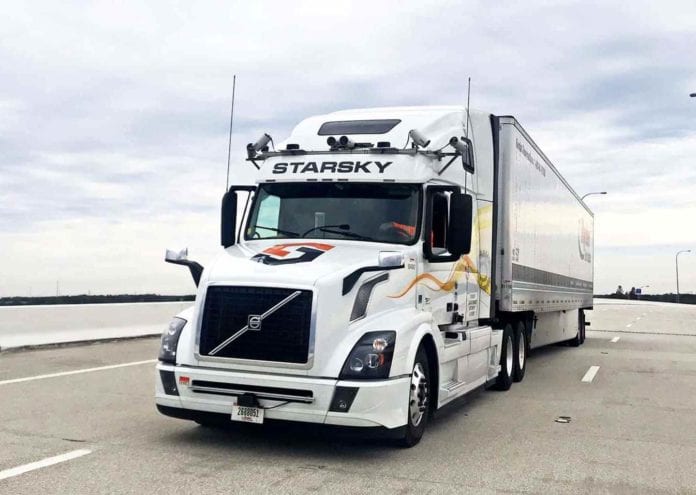 A Starsky Robotics truck wends its way down a Florida highway.

That’s a question that journalists are first asked in college, with the presumption that they will keep asking themselves that same question throughout their careers.

We were asking ourselves that question a few weeks ago, when we came across a new story that seemed awfully familiar. Maybe you saw it somewhere.  A company called Kodiak Robotics, a relatively recent entry in the self-driving truck technology race, had begun using its trucks to make regular, semi-autonomous deliveries between Dallas and Houston.

The story described the runs, clarified just how autonomous their trucks really are — where and how much humans stand guard, and how much they take over when it comes to the tricky parts — and then the story gave the reader a rundown of the company’s brief but meteoric history.

My initial reaction when I read about this milestone achievement was, “Hmm, you don’t say.”

Back in journalism school, I was taught that one of the ways to decide if news was news was to consider that the root word of “news” is “new.” First, is it new in terms of being recent? Second, is it new in terms of being something distinctive? As a news organization, you want to avoid being redundant, being repetitive, to keep telling the same kinds of stories about same things in the same way, over and over and over again, you know what I mean?

That’s the feeling I got with the Kodiak story, like I’d read this story before. That’s because I pretty much had. Back in May, there was a story about a company called TuSimple that had made self-driving mail runs between Phoenix and Dallas. Then in June we had a story about a company called Starsky Robotics, how they drove a truck essentially by remote control for nearly 10 miles on a highway in Florida, breaking their personal best, set last year when the story was about how they drove a truck for about 7 miles on a Florida highway.

By sheer repetition, the Kodiak story had a “so what else is new?” feel. Sure, self-driving technology is a fascinating topic, one that will undoubtedly have a profound impact on the industry someday, but do we need to run a story every time one of these companies has what it wants us to consider a breakthrough?

It reminds me of when astronomers started finding exoplanets — planets orbiting stars outside our solar system. The first time it happened, it was a huge deal, without question. And then when they found a few more, that was a big deal, too, because it indicated that the galaxy is crawling with exoplanets.

But then they kept finding them. That first exoplanet was confirmed in 1992. Today, they’ve found more than 4,100 exoplanets. It’s fun, every once in a while, to get an update on the running total, and now and then they find one that’s particularly unusual. But let’s face it, at this point, most of us are waiting now for the day astronomers can say they pointed their telescope at one of these planets and saw someone waving back.

I think we’ve reached a similar point with autonomous truck technology. For a few years, the industry had been inundated with proclamations from companies large and small, shouting over one another that they were somewhere between 15 years and 10 minutes away from perfecting autonomous vehicle technology.

Then in 2016, a small company called Otto, which by that point has been sucked up by Uber, ran a truckload of beer “autonomously” for 120 miles in Colorado. Reporters, wanting to demonstrate their thoroughness, dutifully noted that it was exactly 51,744 cans of Budweiser.

The story captured America’s attention because it represented the first commercial use of automated truck technology — and because it involved beer. Since then, Otto is defunct and Uber is out of the self-driving truck race, but they established the template for autonomous truck testing stories.

Ever since then, we’ve gotten occasional stories about one company or another that was about to do some kind of road testing out on real roads. That, of course, is enough to get the public’s attention.

The details may vary, but the stories all run pretty much the same. First, the experimental run, publicized just before or just after it occurs, or both, is presented like it’s the boldest undertaking since the Apollo program. A closer read usually indicates that while it may represent a small step for mankind, it is a giant leap for that particular company.

We also get the obligatory history of the company. They’re always presented like modern-day Horatio Alger tales, the little company that could, that pulled itself by its own bootstraps – and raised $50 million in investment capital. These on-road breakthroughs always seem to come fairly soon thereafter.

They still like to refer to themselves as “startups,” because it makes it sound like it’s two guys working out of their garage. I know the term is fairly new, but I think we need to set some rules, like, if you’ve been around five years, have facilities in three states and your company’s value is in the eight-figure range or above, you are no longer a startup, you’re just an “is.”

For some of these companies, publicity seems to be its own reward, or maybe they’re hoping to drum up more of that sweet, sweet investment capital.

This summer, TuSimple, the company made the postal runs in May, seems to have fallen in love with the limelight. After calling attention to their postal endeavor, they announced that the company had embarked in a partnership with a community college to create an “Autonomous Vehicle Driver and Operations Specialist” program, a five-course curriculum open to Class A CDL holders, ostensibly to prepare them for the jobs of tomorrow. The press releases touted it as being a one-of-a-kind program, which I suspect is a distinction it may hold for quite some time.

Then, a few weeks later, TuSimple was back in our email boxes with the announcement that UPS had made a small investment in the company and was working with TuSimple on studying the viability of autonomous trucking.

Sounds like a smart idea, but why did TuSimple think we all needed to hear about it? When a company sends out a press release, it’s always because its trying to sell something, even if that something is the brand itself.

Seeing it from their side, it may be sound strategy. But as the stories of autonomous testing come more frequently, the bar is set higher. Sorry, “startups,” you’re a victim of your own success. Simply getting a vehicle on the road isn’t the headline-grabber it used to be.

Now, once we can wave at an autonomous truck and it blows its horn back, then we’ll have something.

Many highway closures still in effect due to Arizona storm