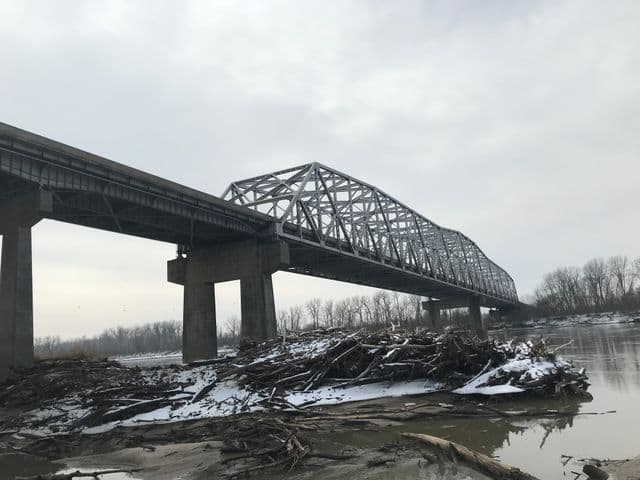 JEFFERSON CITY, Mo.  — Missouri senators on Thursday gave initial approval to a compromise plan by spending $50 million upfront and potentially borrowing another $300 million to fix 250 bridges across the state

The $300 million bonding would only come if the Missouri Department of Transportation receives enough federal matching grant money to rebuild the Interstate 70 bridge in the mid-Missouri city of Rocheport.

The deal comes after senators debated overnight Tuesday and into Wednesday over whether to borrow money for transportation work.

Some Republicans complained about taking on debt and interest through bonding. The new proposal reduces borrowing and commits to paying it off in a shorter period of time.

Lake Saint Louis Sen. Bob Onder said he wanted a pay-as-you-go approach, adding that “bonding debt is not my preferred way of dealing with this.”

“But I think we’re perhaps coming to a reasonable compromise on this,” he told colleagues on the Senate flood.

Lawmakers have been split over how to pay to repair roads and bridges after voters in November defeated a proposed 10-cent gas tax hike for transportation.

Republican Gov. Mike Parson in January proposed borrowing about $350 million for bridges that would be paid off over 15 years.

That plan drew bipartisan pushback, both from fiscal conservatives and a bipartisan group of Kansas City and St. Louis lawmakers who argued that not enough bridges from their areas would be repaired with the money. Others pitched asking voters again for a gas-tax increase.

Republican House Budget Committee Chairman Cody Smith instead proposed putting $100 million in un-earmarked general revenue toward roads and bridges each year for the next several years, which drew praise from members of the Senate’s Conservative Caucus.

But Republican Senate President Pro Tem Dave Schatz argued that doing so could put the federal matching grant for transportation in jeopardy. He said the state Transportation Department applied for about $172 million.

Even if the state only gets between $60 million and $70 million, Schatz said that would be enough to jumpstart plans to replace the Rocheport bridge.

The bridge is roughly in the middle of the state between St. Louis and Kansas City. Schatz said the bridge is vital to transportation and commerce in the state and was key to the compromise.

“If that’s not in play, I think it might be difficult to get any of those members to say, ‘Hey we want to take on more debt at this time,'” Schatz told reporters Thursday.

Parson in a Thursday statement thanked lawmakers for reaching the deal.

“While our preference would be for an approach that does not put the fate of long overdue bridge repairs in the hands of Washington D.C., we certainly understand that any proposed plan requires compromise to reach a workable solution,” he said.

The measure is expected to come up for a final Senate vote Monday. Senate Majority Leader Caleb Rowden said he worked with House leaders on the compromise and said he feels “comfortable that we will get to where we need to be to get this thing across the finish line.”

“I’m not sure anybody loves it, from all sides of the spectrum,” Rowden said. “Some folks didn’t want to bond. Some people don’t want to use general revenue. Everybody knows there’s a problem. But it’s one of those things where it is progress.”