Home The Nation ‘Pride in my ride’: Arkansas trucker brings solar power, style to his...
Chad Fowler and a group of friends transformed his 1996 379 short-hood Peterbilt into a comfortable, energy-efficient ride in about 90 days. The truck features solar panels, a 110-inch double sleeper, a pronounced Batman symbol and a plethora of other small details. (The Trucker: Wendy Miller) 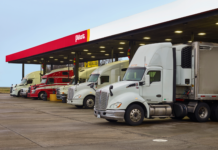