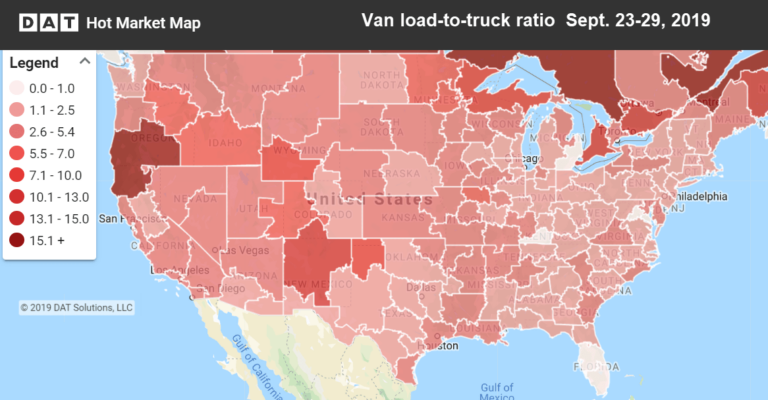 The spot market recovered the 25% loss in volume during the previous week when Tropical Storm Imelda disrupted supply chains in the Houston area and other regions across the Southeast and Midwest. The number of truck posts increased 19%, reversing a 17% decline the previous week.

National average spot van, refrigerated, and flatbed rates, on the other hand, were largely unmoved week over week and affected mainly by a higher fuel surcharge.

The national average van load-to-truck ratio averaged 2.2, up from 2.1 the previous week. Spot van rates were higher on only 32 of DAT’s Top 100 largest van lanes by volume. Rates typically rise with freight volumes, especially during the final week of a business quarter.

Where rates were up: Volume from Houston increased 20% and Charlotte, North Carolina, was up 19%, but in keeping with the national trend, outbound rates ($1.68 and $1.98 per mile, respectively) failed to budge.

Seattle rose 6 cents to $1.63 per mile, mostly on southbound lanes. Seattle to Los Angeles gained 8 cents to an average of $1.31 per mile. Freight availability in Los Angeles remains strong, with the load-to-truck ratio hitting 5.8 last Friday and averaging 4.2 last week.

The national average reefer load-to-truck ratio increased from 3.9 to 4.2 as volumes picked up 2.4% on the 72 largest lanes. Like the van market, reefer rates did not respond: only 18 lanes rose while 51 moved lower.