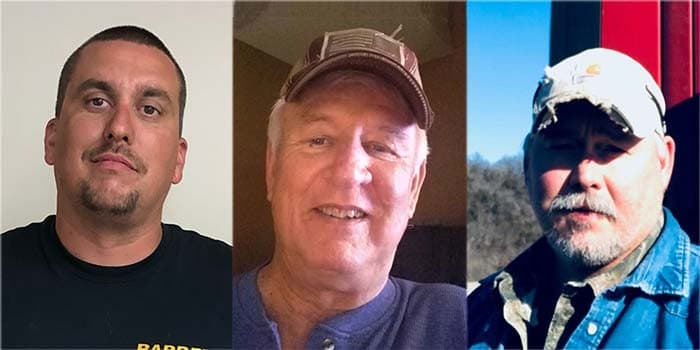 ALEXANDRIA, Va. — Daniel Barnett, Denny Cattell and Mike Johnson have been recognized as Highway Angels for willingness to stop at the scene of any accident or other traffic incident and render aid until emergency services arrive.

On Tuesday, July 24, Barnett, who lives in Reynoldsville, Pennsylvania, and is a professional truck driver for Barber Trucking, had reloaded his flatbed and was on his way to Buffalo, New York. As he turned onto Highway 19 in West Virginia, the driver saw brake lights up ahead.

Coming around a bend in the road, Barnett noticed a two-vehicle accident just ahead in an intersection. As he approached, other motorists were frantic, struggling to open the driver’s door of a small minivan.

Nearing the scene, Barnett noticed smoke rolling out from underneath the hood. Acting swiftly, , he safely stopped, positioning his truck to divert traffic away from the accident scene. Barnett quickly pulled tools from his truck and went around to the passenger side of the inoperable minivan and broke the window.

Without a moment to spare, he then gave someone his pocketknife to cut the driver’s seatbelt so that one of the bystanders, a nurse, could administer aid. Barnett quickly ran back to his truck for a fire extinguisher — he wanted to ensure nothing caught fire as they waited for emergency vehicles to arrive. Fortunately, it turned out to be steam coming out from under the hood.

Thinking back on that day, Barnett says he doesn’t believe he did anything particularly heroic.

“I would hope someone would do it if my wife or daughter were in that situation and not just drive by thinking someone else will do something.”

Cattell lives in Altoona, Georgia, and is a professional truck driver for Bennett International Group of McDonough, Georgia.

On August 1, motorist Patricia Lister was traveling with her daughter and two great-granddaughters in their RV on Interstate 80 in Illinois when they came upon a large truck tire tread in their lane.

Because of to traffic conditions at the time, they weren’t able to avoid the tire, and as a result, it completely removed the RV’s exhaust system. The family found themselves stranded on the shoulder of a very busy interstate.

Patricia, a woman in her 80s, was struggling to push the damaged exhaust system off to the side. She said she was grateful when Cattell stopped to offer assistance.

Cattell advised Patricia that the 14-foot-long exhaust system could likely be repaired. Just then, an Illinois state trooper arrived and diverted traffic to the left-hand lanes while Cattell put the RV’s exhaust system on his truck. The family then followed him to a shop in the Quad Cities that he found via Google. Once there, he made sure the shop could manage the repairs before continuing on his way.

“She was quite thankful, and I was thankful no one got hurt,” said Cattell.

Johnson lives in California, Missouri, and is a professional truck driver for Ruan Transportation Management Systems of Des Moines, Iowa.

He is being recognized for rescuing a small child, found alone in a ditch, in the wee hours of the morning.

It was 4 a.m. on July 13 and Johnson was traveling on Highway 19 in Missouri, making his way to pick up a load in Iowa. As he approached the tiny town of Laddonia, Missouri, he could see something white ahead of him, in the ditch, reflecting in his headlights. Maybe it was a deer, he thought. It was dark out and his headlights were the only source of light. As he got closer, the white object popped up out of the ditch. It was a small child, barefoot, and wearing only a diaper. Johnson carefully pulled over to the shoulder, putting on his hazards. The child, holding an orange sippy cup, climbed out of the steep ditch and ran across the two-lane road toward Casey’s General Store. It hadn’t opened yet and there was no one else around.

Johnson got out of the truck and carefully approached the child but it ran back across the road and into a gravel parking lot. The child was visibly frightened and crying. He finally caught up to the child, picked it up, tried to comfort it, and called 911. The child put its head on Johnson’s shoulder and hugged him tight. A police officer arrived and took the child to be examined at a local hospital. Later, Johnson phoned the City Hall and learned the child was a little boy and officials had located his mother.

Johnson is a single father of a son and hates to think about what may have happened to that little boy if he hadn’t happened to glance at the ditch at just the right time. “You’re always watching for deer,” Johnson says, “but that day, it just came down to seeing the movement and stopping to check it out.

Ruff Yokley is a dedicated transportation manager at Ruan Transportation. “Mike’s attentiveness for always scanning for anything that might come out of the darkness and his experience expanding his view saved the life of this toddler,” he said

For his willingness to assist, TCA has presented these Highway Angels with a certificate, patch, lapel pin and truck decals. The carriers for whom the drivers work also received a certificate acknowledging their driver as a Highway Angel.