LAROSE, La. — A Louisiana pilot experiencing engine trouble made a safe emergency landing on a highway.

WWL-TV reported that longtime pilot Howie Guidry was about an hour into his flight and 2,000 feet in the air when his plane experienced engine trouble on a Thursday morning flight.

He knew he couldn’t make it back to an airport and remembered the advice of his training instructor to land on the biggest highway he could find.

“I had to make fast decisions to get on the ground safely. Through my years of training, my flight instructors always told me ‘Fly the plane until you get on the ground. Fly it, fly it. Don’t give up,'” Guidry told the TV station.

The pilot landed on Louisiana Highway 3235 near Larose in Lafourche Parish. The landing was caught on camera by an astonished truck driver.

“I didn’t hear anything until he came into my line of sight and then I just couldn’t believe it,” driver Keith Gros said.

To make the landing, the pilot had to fly under some power lines. After landing, Guidry and a mechanic who was flying with him quickly pushed the plane off the highway. 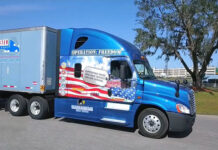 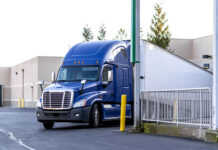 WASHINGTON — Commercial drivers transporting grocery and paper products for emergency restocking related to the COVID-19 pandemic have been reinstated in the latest extension...

CHARLESTON, S.C. — The first phase of a new terminal at the South Carolina Ports is on schedule to open in March, officials said. Port...
For over 30 years, the objective of The Trucker editorial team has been to produce content focused on truck drivers that is relevant, objective and engaging. After reading this article, feel free to leave a comment about this article or the topics covered in this article for the author or the other readers to enjoy. Let them know what you think! We always enjoy hearing from our readers.