If Angelique Temple had decided to throw in the towel on trucking years ago, it would’ve been understandable. After all, the first time the Queens, New York, native mentioned wanting to be a driver, her father immediately put his foot down.

“I was 12 and my dad was a supervisor for the New York Times,” Temple said. “I was riding with him, and he was showing me some other things and I said, ‘Look at that. That’s what I want to do,’ It was a tanker.

“He was like, ‘Oh, no, no, no. No daughter of mine’s going to drive a truck.’ Because back then, the stories were horrid about the truck drivers. It wasn’t a good thing,” she continued. “So, I was like, ‘Oh, okay.’”

There was just one problem: Temple never let go of that the dream she discovered that day. In fact, the older she got, the stronger the dream became.

Finally, she set off to driver’s school in Virginia (where she still lives), determined to change minds, prove people wrong and generally reshape an entire industry.

“Trucking school was great, because I actually was only one of two students,” she said.

“Back then, everybody wasn’t really going to school (for truck driving); a lot of people were getting grandfathered in,” she recalled. “So, I went to school, and it was just me and another gentleman. I didn’t have to worry about a whole crowd, and it was great.”

Once out of driving school, it didn’t take long for Temple to discover just how deep and ugly attitudes ran toward women in trucking at the time. But as a single mother with mouths to feed, quitting was never an option — and Temple said her kids’ pride in her career was enough to drown out the haters.

“I think what makes a driver in this line of work good is the dedication,” she said. “It has to be dedication to doing the job, meaning pre-planning. You’ve got to get up at a certain time. It doesn’t matter what you thought you were going to do that day. Just get the job done. That’s No. 1.”

During those days, Temple’s children became more than just her family; they were also her biggest fans.

“They made sure I didn’t quit. They made sure everybody knew who I was,” she said, pride evident in her voice. “Most of the time raising them, it was like single-mom status. My oldest, when people asked her questions about me, she said, ‘We’re trucker’s kids.’ They all had that attitude growing up.”

Temple began driving tankers, just like the one she saw on that outing with her father.

“From that day, he told me, ‘I’m going to nickname you Tornado. That’s going to be your CB handle,’” Temple shared. “I literally live that. It’s become part of my personality. I even have it on my personal vehicle — on the front windshield it says ‘Tornado.’”

Temple wasn’t just fast; she also brought a unique blend of conscientiousness and fearlessness to the job. Tanker driving isn’t for everyone, but she embraced the challenge. As the loads got more dangerous, her reputation for being safe and reliable grew.

“It really was different from starting out pulling gasoline, and then where I was pulling hazmat,” she said. “You go from just going to gas stations, which is dangerous itself, to pulling things that you cannot get on you. You go to pulling acid that, if it touches you, you might not make it home.

“So, it was a big difference pulling into different plants and securing the load,” she explained. “As far as driving, you had to know your distance, know you can’t be like other drivers where you push up on cars. That load’s not going to stop like you want it to stop. You can stop, but the liquid’s going to keep going (surging). It’s dangerous, but it was what I loved to do.”

In the years to come, Temple became one of the recognized authorities when it came to hauling hazardous materials along designated routes in Virginia, North Carolina, Pennsylvania and South Carolina. Some of the largest chemical companies in America called, asking for her by name.

“I was dedicated to some accounts (including) Philip Morris and DuPont,” she said. “I was the only driver that the company owner had that was ever self-dispatched. The customers called me directly. That started from the beginning.”

As Temple’s reputation grew stronger, so did the demand for her driving skills.

“One day they put me on something else, and they put another driver on — and the customer called,” she said. “They said, ‘No, we need Angie to come here. If we can’t work with her directly, there’s going to be an issue.’ Drivers would call and say, ‘Hey, we can’t do this load.’ Dispatch would call me and say, ‘What can you do?’ So, I’m fitting in their loads and I’m fitting loads that got added on.”

Even though it meant extra work, Temple knew it was important to build solid relationships with customers.

“It was like a built-in relationship between me and the customers, because if I said I was going to bring it, they knew it was going to happen, regardless of what I had to do to get it there,” she said.

After nearly 20 years, Temple decided she was ready to realize her ultimate dream of business ownership and launched her own company, Tornado Transport.

“It was good training because I had to be more than a driver. I had to figure out how to work from the driver’s standpoint, and being self-dispatched I had to figure out how shippers operate, how customers operate,” she said. “I had to get all my information, all my ducks in a row, because when I stepped away from being a senior driver, I stepped away making $120,000. I was the highest-paid driver there.

“So, I had to make sure when I’m stepping out, that whatever I’m doing is successful from the first day,” she added. “And it has really been phenomenal.”

Instead, she’s decided to pull 52-foot box vans behind her 2018 International LT625, and she hauls a little bit of everything. In addition, she’s got two other businesses that are just about ready to roll out — one in logistics and one in real estate.

Years of success haven’t made Temple forget the lean times she and her family endured. Because of this, she’s constantly looking for ways to help others.

“We do a lot of charity work,” she said. “Like Thanksgiving, we gave to two charities to feed the homeless. That’s something where my husband and myself both had the same heart. It was something that I always wanted to do, being a mom of six — to try and find ways to give back because I know how it feels.”

Temple is also in high demand through the Women In Trucking Association, where she mentors young women to help them build the confidence and find the support that was lacking when she started out. Even so, it “ain’t all sugar coating,” she admits with a laugh.

“I have people come up to me even now, through Women In Trucking, and say, “I wish I could do what you do,’” Temple said. “Well, you can do the pity party, but you just can’t do it with me. I have an answer for you, for everything, and how you can do it. You just have to be willing to do it.” 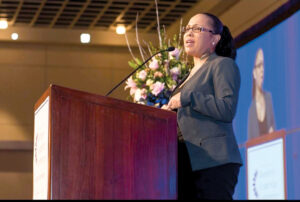