VILLA RICA, Ga. — Robert Morris has a lot of women in his life.

As for Morris, a lot of years passed between the first time he took the wheel of a tractor-trailer and Fiona’s arrival.

Growing up below the wheel

“I’m a 16-year driver with 38 years of experience,” Morris said with a laugh.

Like several drivers we’ve met from the days before a truck-driving job required a commercial driver’s license (CDL), Morris got into the business at an early age. Then again, for kids like Morris growing up in Southern regions like Carroll County, Georgia, learning to drive before they could reach the brake pedals wasn’t unusual. Of course, most kids didn’t start out with an 18-wheeler.

“My grandfather and father both drove trucks,” said Morris, who today lives in Villa Rica, Georgia.

Morris’s grandfather told him to sit on his lap and trying steering the truck. The next thing Morris knew, he was sitting alone in the driver’s seat; his grandfather had slipped to the passenger side.

“I don’t know how far I drove,” Morris said. “It may have been a quarter-mile, but to me it felt like a hundred miles.

Trucking without a booster seat

Despite the family tradition, Morris didn’t rush into a professional truck-driving job. He spent a few years working in the HVAC business before taking a step toward driving a truck.

“I worked as a driver’s helper, distributing food products to all Burger King franchises in the Southeast,” Morris said. When the company created an in-house CDL training program, Morris jumped in with both feet.

“It was a great setup,” Morris said. “I was riding in the truck, so I just as well could have been getting hours behind the wheel. After six weeks, I had the supervised experience I needed to take the CDL test.”

After Morris received his CDL, he drove for five years before becoming a trainer himself. “I rode with 24 trainees,” he said. “As far as I know, all 24 are still on the road today.”

Morris says truck driving is an occupation almost tailor-made for him.

“I don’t like working inside, and I really don’t like working with a lot of people,” he said. Those preferences lead to Morris hauling a lot of specialty freight, something other drivers try to avoid. He’s worked as an OTR driver but prefers driving for a small carrier like CDJ Bulk Express.

“When CDJ buys a new truck, the company encourages the driver to come up with a unique color scheme or wrap, and the company pays for customization,” he said.

“When I got my truck, I wanted something different,” he continued. “The trucks arrive green, and a lot of drivers just add some black or white. But the company wants us to take ‘ownership’ of our trucks, so I kept looking for something unique.”

Morris’ wife, Tiffany, works as a special-education teacher at a day care. When the son of one of her co-workers was diagnosed with high-functioning autism, Morris said the issue of autism awareness intrigued him.

“The NFL and NASCAR have autism-awareness weeks,” Morris said. “I liked the idea. I showed the graphics guy the colored puzzle pieces symbolizing autism awareness. He took my idea to a whole new level. The wrap he put on is 3D.”

“The hood looks like it’s ‘puffing’ out as you walk by. People can’t help but touch it. I’ve posed for a lot of photos with Fiona,” Morris said.

But where did the name come from?

“My last truck was green, and I called it ‘The Incredible Hulk,’” Morris said. “When the kids’ movie ‘Shrek’ came out, Fiona was the ogre’s girlfriend. The guys started calling (The Incredible Hulk) ‘Fiona’ instead.”

With a new green truck, Morris decided to beat them to the punch. Plus, he said, “Fiona” is a good name.

“Drivers like naming parts of their trucks,” Morris said. “Fiona has twin stacks — there’s Becky and then there’s Bill.’”

You’ve got to give Morris a break, after all. With all those women around, it’s only fair he has an exhaust stack on his side.

“My first introduction to autism (was) a family at church who had a son on the spectrum. He was nonverbal, with sensory issues,” Morris said. For Morris, meeting and watching the youngster was an education in itself.

“One day he had what other folks called a ‘temper tantrum,’” Morris said. “But it wasn’t a tantrum; it was a full-fledged meltdown. I could see his family was really struggling.” It turned out the wind had blown the youngster’s hair a direction he didn’t like, and he experienced sensory overload.

“Part of Fiona’s message is, ‘Don’t judge a kid off what you think you know,’” Morris said. “Every kid is unique, and every family has unique challenges.”

A benefit of driving Fiona is the many people, including drivers, who take the time to tell the stories of their own children who are on the autism spectrum.

“They really seem to appreciate what I’m doing with my truck,” Morris said.

Puzzling the pieces together

Morris advises anyone interested in driving a truck to understand that it is not a job — and it is not a career, either.

“Truck driving is a lifestyle,” he said. As a driver, he and his family accept the impact the nature of the job has on their lifestyle.

“They all know that when I’m home, it’s only temporary,” Morris said. “And during that time, I only have a few hours a week to be a dad, husband, lawn boy and handyman.”

As far as driving a truck for a living is concerned, Morris said young drivers need to steer clear of the stereotypes shown on television.

“It’s not all ‘Smokey and the Bandit’ out there,” Morris said.

As Morris suggests, driving a truck may not be as entertaining as Burt Reynolds and Jerry Reed creating chaos between Texarkana and
Atlanta. In the real world, it’s Robert Morris, his family and Fiona, Becky and Bill, all traveling with a purpose — focusing on autism to remind us our differences don’t nearly offset the sum of what we have in common.prim 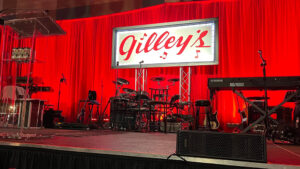 Thank you so much. Our son is 19 has had autism all his life. Always bulled and made fun of. When he see a truck like this he gets excited. He seen a Yellow in spfld, mo. He honk his horn mom. He never been a big boy truck. I appreciate your support and all other gentlemen. God bless.