It’s hard to miss Ohio-based livestock hauler Pam Cox on the highway. She’s the blonde with the big smile who’s driving a hot pink 2016 Peterbilt 389 Pride and Class tractor, embellished with lots of chrome and a big breast-cancer-awareness ribbon. As far as she knows, hers is the only pink livestock truck traveling the U.S.

“You can see it from miles away. At night, I switch all my lights over to pink,” she said. “The biggest comment I get from other drivers is usually, ‘I don’t like pink, but I like your truck. It is sharp.’

“When my farmers, ranchers and growers see my truck, they ask, ‘What kind of guy is driving that truck?’” she continued.

Cox has had the eye-catching tractor for three years and has displayed it at the Mid-America Trucking Show in Louisville, Kentucky, as well as at truck shows in Iowa and Illinois. The truck has also been featured at local car shows and cancer-awareness events.

Driving a truck that raises awareness of breast cancer is important to Cox because of the impact the disease has had on her friends. Marleen Burgess, the woman who served as Cox’s mentor when she entered the trucking industry 33 years ago, is a breast-cancer survivor, and Cox’s mother’s best friend also battled breast cancer. In addition, Cox said, her daughter had a best friend whose mother died from breast cancer.

When Cox started driving more than three decades ago, she said it was difficult to find acceptance among her male peers. She had to “earn her stripes” and work to gain their respect.

“One of the hardest things when I first started was the fact that a lot of truck stops didn’t have any things for women, including separate bathrooms,” she said. “They would have to shut the men’s bathroom down so (women drivers) could go into the shower.”

Often Cox had to show her CDL to gain access to truck-stop amenities because employees assumed that she — as well as other female drivers — were actually “lot lizards.”

“(Women) have to do what the guys do, but do it better, without complaining and without trying to push the issues,” she said. “I think for the single female drivers, everybody expects you to have a male in the truck. I don’t need a man in my truck. I can do this job.”

Cox discovered an interest in trucking after watching her father and grandfather drive, and she enjoyed riding along with her father on some of his trips. Her grandfather, however, told her that women didn’t belong in trucking — which just made her want to do it more.

“I enjoy the freedom of the road,” she said. “I haul livestock and so I put my two passions of driving and animals all in one. Every day is a different challenge, when you wake up.”

For almost her entire career, Cox has hauled livestock, but she said she took a year “off” to haul vehicles for Ford.

Cox is an active member of the S.H.E. Trucking Sisterhood group, a Facebook online community with more than 9,000 members. The group was founded in 2017 by Sharae Moore, a professional truck driver from Chattanooga, Tennessee.

“I met Pam at a truck show, and she stood out because of her pink truck. She was one of the first women I saw in the show; usually it is only men. I wanted to support her any way I could,” Moore continued. “I thought her truck was so pretty, and every woman loves a pink truck. It is very inspiring. I thought it was amazing.”

Cox said she had never met a person like Moore, adding that Moore has an “aura” about her and is very enthusiastic about trucking.

“She draws you; it really is an amazing group to be a part of,” Cox said, adding that while the S.H.E. Trucking Sisterhood is primarily an online group, members do run into each other while on the road.

“We are a group of lady drivers that uplift and support one another,” Cox said. “We provide encouragement and help, whether you have been on the road for six days or 30-plus years. It is a sisterhood; that’s the only way to describe it.”

“I love what she stands for and her mission,” Moore said. “She is easy to connect with and is one of the strongest women I know. She is amazing. She inspires many women with her pink truck. She is an encourager.”

S.H.E. Trucking started as a clothing line for women truckers that Moore founded when she couldn’t find T-shirts, hats and jackets designed for female drivers. Moore said she wanted women to be proud of their careers in trucking. Since its founding, S.H.E. Trucking has expanded, growing a community and sisterhood for women in the industry.

“That is something I wanted as a woman driver, so that’s why I started it. I wanted a community of other women drivers,” Moore said.

“Whether it is trucking-related or family-related, we are there for one another,” Cox said.

Sam Pierce has been a journalist for more than a decade and has written for several publications including The Trucker, the Arkansas Democrat-Gazette, and Living Our Faith magazine. He enjoys spending time with his family including his two daughters. They like to watch movies, read books and build LEGO sets. 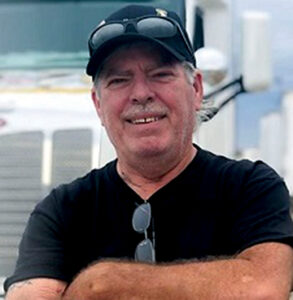 Outreach over the road: Truckstop Ministries has been serving truckers for nearly 40 years

Sam Pierce
Sam Pierce has been a journalist for more than a decade and has written for several publications including The Trucker, the Arkansas Democrat-Gazette, and Living Our Faith magazine. He enjoys spending time with his family including his two daughters. They like to watch movies, read books and build LEGO sets.
For over 30 years, the objective of The Trucker editorial team has been to produce content focused on truck drivers that is relevant, objective and engaging. After reading this article, feel free to leave a comment about this article or the topics covered in this article for the author or the other readers to enjoy. Let them know what you think! We always enjoy hearing from our readers.

Thank you being a “rolling” billboard to keep this terrible disease in the forefront. I am 85 years old and a 10 year breast cancer survivor. I pray that in my lifetime there will be a cure.

Thank you being a “rolling” billboard to keep this terrible disease in the forefront. I am 85 years old and a 10 year breast cancer survivor. I pray that in my lifetime there will be a cure.

I tried to comment but when I pressed done it would. OT accept

Thank You for putting the awarness out there. I used to drive trucks, I had to give it up after 15 years. I miss it. You ladies keep those wheels rolling, be careful.

Thank you ma’am and we sure will

Great awareness for the women that dont drive miss you pam. all your friends in texas

Hey Pam , i read the article , and your family must be very proud of you , you go girl , i’ll keep you in my prayers