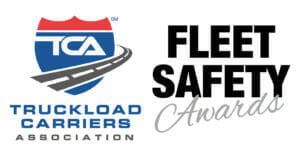 These awards identify trucking companies that have demonstrated an unparalleled commitment to safety. The top three winning companies in each of six mileage-based divisions had the lowest accident frequency ratios per million miles, annually.

The division winners are now invited to compete for one of two grand prizes — one for carriers with a total annual mileage less than 25 million miles, and the other for carriers with mileage greater than 25 million miles. Grand-prize winners will be announced at Truckload 2021: Las Vegas — TCA’s Annual Convention — April 17-20, at the Wynn Las Vegas Resort. All winners will also receive recognition at TCA’s 2021 Safety & Security Meeting, June 6-8, in St. Louis.