As if the disruption of the Colonial Pipeline caused by a May 7 ransomware attack wasn’t bad enough, consumers panic-buying gas in anticipation of a fuel shortage placed a strain on the supply of fuel to not only the states affected by the pipeline disruption, but also other areas of the country.

Combine this with the major traffic disruption caused by the May 11 closing of the Interstate 40 bridge spanning the Mississippi River between Arkansas and Tennessee, and the tanker truck industry is experiencing what might seem to be a perfect — and unfortunate — storm. This has prompted the shortage of drivers to take center stage as the nation’s attention turns to a single topic: fuel.

Industry leaders are warning that the years-long driver shortage in the tanker truck industry is likely to hit home for millions of Americans in a very personal way this summer as families hit the road for vacation.

In early May, national news outlets reported what industry professionals have long known: Lack of drivers will likely mean higher prices and even shortages of products typically hauled by tanker trucks, such as gas, chemicals, and food-grade liquids.

“The sensationalism the headlines spun up was, ‘Oh my God! Now we can’t have summer vacation because we’re not going to be able to get gas,’” she explained. “I want to mention that (the issue is) bigger than gas, although that’s what’s getting the headlines right now. It’s not a supply issue, it’s the ability to transport it.”

Groendyke hauls petroleum and chemical products, as well as makeup, soaps, hand sanitizers, and more. The carrier employs 865 drivers, but if afforded the chance, McCormick said she would add substantially to that number just to meet current demand.

“I could employ an additional 150 drivers without even blinking an eye,” she said. “That’s just current business capacity. There is more business available that we can’t even consider, at this point.”

Other trucking companies are in the same boat, even if they don’t haul fuel, including J&M Tank Lines of Birmingham, Alabama, which hauls industrial materials, food products, and plastics, and Iowa-based Weinrich Truck Line, Inc., which transports products such as food-grade oils, chocolate, wine, and grape juice.

J&M Vice President of Human Resources Eric Hanson said he’d immediately add 50 drivers to the 400 already employed by the company if he could.

“We have more freight than we can handle because we’ve got customers coming out of the woodwork, wanting us to haul all of their loads. The opportunity is there, and it becomes frustrating when you can’t service customers at the level you’re used to doing,” he noted. “Trucking is a low-margin business, and when the opportunity is there, you always want to be able to seize the moment. Having so much opportunity and not enough resources to capture it all, I think, is the main cause of stress in the industry right now.”

Weinrich Vice President Brenda Dittmer said the company, which operates about 40 tanker trucks, could stand to hire a few more drivers. However, she said, as a food-grade hauler, her company is not suffering from the driver shortage as acutely as those that haul petroleum products and other hazardous materials.

“I would say, yes, there is definitely a national shortage of truck drivers,” she shared. “I’m not sure I’d say the tank fleets, as a whole, are hit harder — except possibly the hazmat carriers, as the drivers with a hazmat endorsement are probably harder to find.”

But there is not one single root cause of the driver shortage. Retirement of aging drivers is one drain on numbers, as are the stimulus checks and enhanced unemployment payments that have kept people at home instead of on the job — whether that job is behind the wheel or somewhere else.

“Our drivers have to have tanker endorsements, hazmat endorsements. The majority of our chemical drivers are also required to have a TWIC, which is the transportation workers information card that is required for ports of entry,” said McCormick.

Many tank truck carriers say they are putting increased focus on job fairs and accelerating programs in local schools to try and sell students on a career in truck driving. However, such efforts are hampered by driver minimum age restrictions as well as by the image problems that trucking faces overall.

“It’s probably one of the best-paying jobs you can get without a post-secondary education,” added McCormick. “At the same time, you don’t hear a lot of parents telling their kids, ‘You should be a truck driver. That’d be a great career opportunity for you,’ because home time isn’t flexible and some of the things that are more appealing to a younger generation, truck driving doesn’t really offer that.”

“There are many positive attributes to being a tank driver,” she said. “For one, it’s less ‘hands on’ when it comes to loading and delivery. There is less time sitting at loading docks, less seasonal fluctuation in food grade products, and therefore less volatility in the freight available at any given time.”

The trucking industry as a whole has made inroads to maximize new and undertapped sources of drivers, such as military veterans and women.

“J&M’s always been actively involved in a lot of associations and the programs that they support,” said Hanson. “Here recently though, we have been even more active. We’ve doubled down on workforce development programs, specifically here in Alabama — promoting the industry to younger people in high school, middle school. We just did an event with Women In Trucking, and even the Girl Scouts to promote opportunities in the industry.”

In addition to recruitment, Hanson said, companies need to recognize the importance of taking care of the drivers they already have.

“I think sometimes as an industry we try to overcomplicate it,” he said. “‘What does the driver want? What can we do?’ My message has always been that the drivers want what you want and what I want. Everybody wants to have a voice; everybody wants to know that they’re being heard. You would call that respect.”

Dwain Hebda contributed to this report. 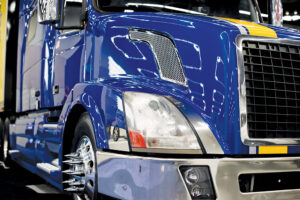