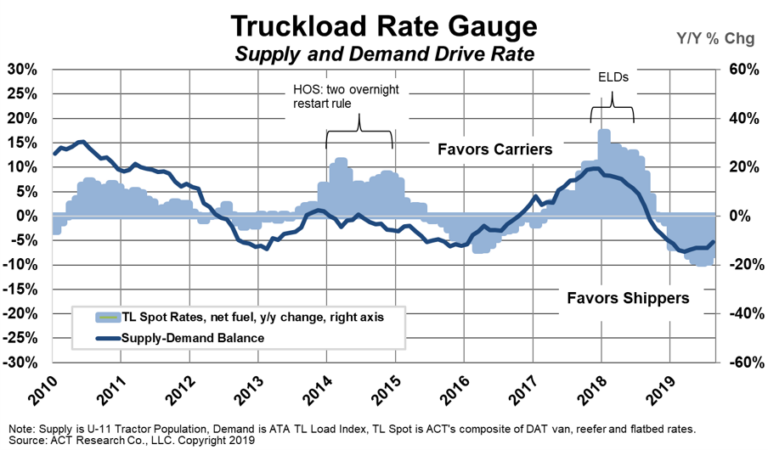 The ACT Freight Forecast provides three-year forecasts for volumes and contract rates for the truckload, less-than-truckload and intermodal segments of the transportation industry, and for the truckload spot market, the report forecasts the next twelve months. The Freight Forecast provides unmatched detail on the future of freight rates, helping businesses across the supply chain plan for the future with confidence.

Based on ACT’s For-Hire TL Carrier Database, TL contract rates fell to $2.28 per mile in Q3, down 2% year over year, following a 3% increase in the second quarter.

“We’re seeing evidence that a bottoming process is beginning in the truckload cycle from truck order and survey data,” said Tim Denoyer, ACT Research’s vice president and senior analyst. “It will be gradual, but we think spot rates will turn positive in mid-2020. Meanwhile, for-hire freight volume continues to be soft, pressured by ongoing private fleet capacity additions, so we don’t think we’ve seen the worst of the contract rate pressure yet.”

Denoyer cautioned carriers not to jump to the conclusion that capacity is tightening because of carrier failures.

“Those are not unusual in this business and the fact is U.S. fleets bought more new Class 8 tractors in September than any month in history,” he said. “So, capacity is not yet tightening, and build plans are still above replacement for the next six months. Rather, roughly 10k net new tractors were added to US highways in September, mainly by private fleets.”

Denoyer said freight had softened since the September 1 tariff imposition, because in part of the temporary strike at GM, and declines have broadened to every major rail category except petroleum.

“As GM ramps production back up, the major declines in fourth quarter to-date rail volumes should moderate somewhat,” he said.

ACT Research is a leading publisher of commercial vehicle truck, trailer and bus industry data, market analysis and forecasts for the North America and China markets. ACT’s analytical services are used by all major North American truck and trailer manufacturers and their suppliers, as well as banking and investment companies.