“While there are indications that the economy is losing momentum, I believe October’s tonnage softness was more of a seasonal issue during a pandemic than anything else,” said Bob Costello, chief economist for ATA. 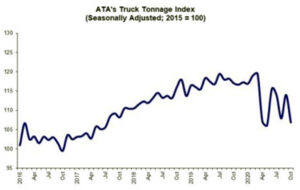 September’s gain was revised down to 5.7% from ATA’s October 20 press release.

Compared to October 2019, the seasonally adjusted index contracted 8.7%, the seventh straight year-over-year decline. Year to date, compared with the same period in 2019, tonnage is down 3.9%.

The not seasonally adjusted index, which represents the change in tonnage actually hauled by fleets before any seasonal adjustment, equaled 114.4 in October, 2.7% above the September level of 111.4. In calculating the index, 100 represents 2015. ATA’s For-Hire Truck Tonnage Index is dominated by contract freight as opposed to spot market freight.

Trucking serves as a barometer of the U.S. economy, representing 72.5% of tonnage carried by all modes of domestic freight transportation, including manufactured and retail goods. Trucks hauled 11.84 billion tons of freight in 2019. Motor carriers collected $791.7 billion, or 80.4% of total revenue earned by all transport modes.

ATA calculates the tonnage index based on surveys from its membership. This is a preliminary figure and subject to change in the final report issued around the fifth of each month. The report includes month-to-month and year-over-year results, relevant economic comparisons, and key financial indicators.