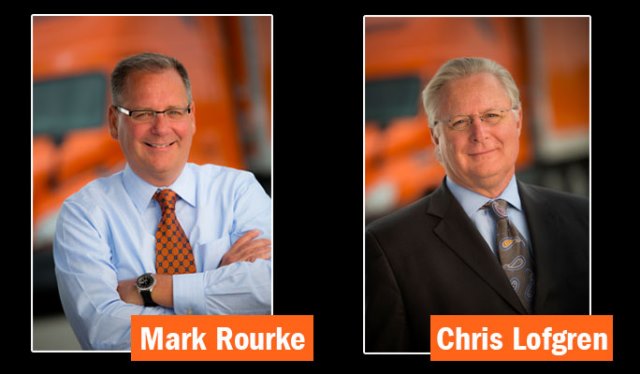 GREEN BAY, Wis. — Chris Lofgren will retire as Schneider National president and CEO in April 2019 and will be succeeded by Mark Rourke, executive vice president and chief operating officer.

Rourke will become the company’s fourth president in its 84-year history.

Tuesday’s announcement is consistent with a thorough succession plan that was developed and executed under the board of directors’ oversight during the last several years.

“Mark is the absolute right person to lead Schneider moving forward,” Lofgren said. “He is an exceptional leader, with experience across our entire broad portfolio of services and a track record of proven success. Among many other strengths, Mark is very intelligent, displays sound judgement, understands our business and is an excellent team builder. He is highly respected by the Schneider team and is passionate about the success of our business, our customers, our associates and our shareholders.”

“In this time of significant innovation in the transportation and logistics industry, and the need for a relentless focus on operational excellence, there is no question that Mark is the ideal executive to assume the CEO position at Schneider,” said Dan Sullivan, non-executive chairman of Schneider’s board of directors. “Mark has spent his entire professional career at Schneider and has played a key role in setting the direction of the company, ensuring its financial well-being and positioning the organization for ongoing success.”

Rourke, 54, began his career with Schneider in 1987, at the company’s Seville, Ohio, operating center where he mastered the critical role the driver plays in serving customers and safely delivering business results.

Over his 30-plus year tenure with Schneider, he has held a variety of leadership roles, including director of driver training, vice president of customer service, general manager of Schneider Transportation Management and president of truckload services. He has served in his current role, a key to the company’s succession plan, where he has been accountable for all of Schneider’s service offerings since 2015. During that time, the company has grown revenues by 20 percent, adjusted operating earnings by over 30 percent and adjusted earnings per share by over 45 percent.

“I am humbled and honored with today’s announcement,” Rourke said. “I have been privileged to serve this great company over the last 30+ years and to have worked closely with Chris over the last 12-plus years. Chris has been a great mentor, and I will be forever grateful for the opportunities he has provided me. He took over the leadership of this company from an industry icon, Don Schneider. By leveraging the solid foundation that Don had built, Chris accelerated the company’s position as a transportation and logistics bellwether by embracing technology and innovation, and challenging the status quo. Just as Chris has made the company stronger, I am excited about our future and embrace Schneider’s role in an industry with great opportunity for success.”

Schneider thrived during Lofgren’s 17 years as CEO with the company, doubling its annual revenues to $4.4 billion. During that time, he led the successful transformation of Schneider from a family-led organization to a professional, independently managed enterprise.

Lofgren’s courage and vision guided the organization through the U.S. financial crisis in the late 2000s, while also overseeing the company’s seven-year Quest technology transformation. He also played an integral role on the team that led the company through its successful initial public offering in April 2017.

“I want to thank Chris for all he has done for Schneider, to include positioning the company for this seamless transition with Mark,” Sullivan said. “During his tenure as CEO, Chris has greatly enhanced the financial performance of the company across our broad portfolio of asset- and non-asset based services through excellent leadership, accountability and sound strategic planning to include the important role that technology plays in the company’s businesses. As importantly, this success was attained by doing things the right way and not compromising core values – what Chris would call ‘The Schneider Way.’”