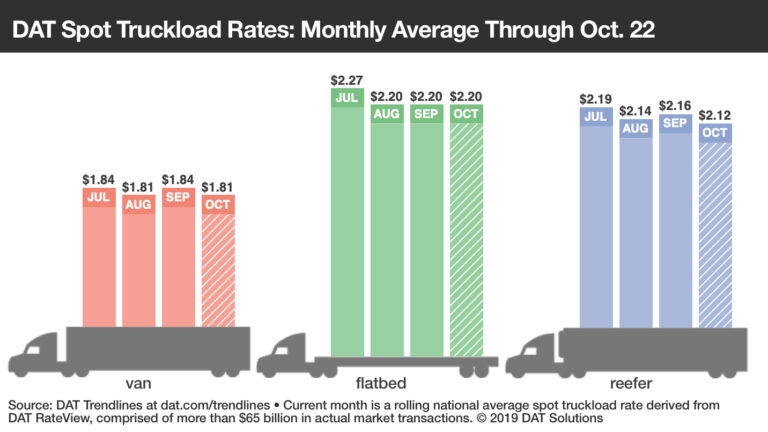 National Average Spot Rates for October (through October 22) include:

Spot van rates were higher on just 33 of DAT’s Top 100 largest van lanes by volume. Chicago, Dallas and Los Angeles, three of the most important van markets, all showed higher volumes last week, although average outbound rates declined in each. The Los Angeles load-truck ratio hit 4.1 last Friday after starting the week at 2.5 (neutral) and dipping as low as 1.8 on Tuesday. It’s a sign that import traffic is moving eastbound.

Where rates were up: Volume from Seattle increased slightly and outbound rate gained 5 cents to $1.58 per mile. Key lanes included:

Seattle is the only major van market where rates are higher over the past four weeks.

A combination of produce from Mexico and strong domestic agricultural shipments from California, Florida, Texas, and the Upper Midwest has pushed spot reefer volumes 9% higher over the past four weeks yet the national average rate has declined 3% at the same time.