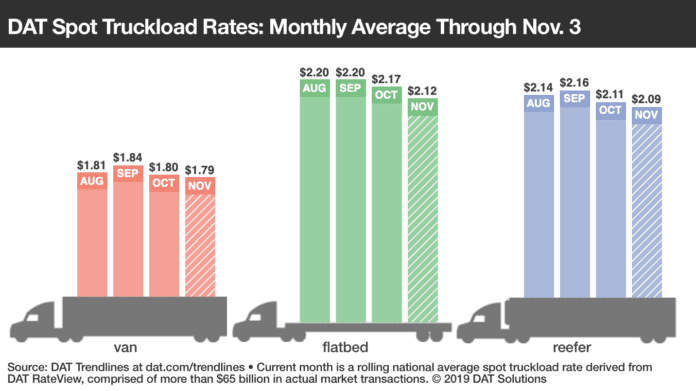 The chart shows the rates for van, flatbed and reefer for August, September, October and the first week of November. (Courtesy: DAT SOLUTIONS)

PORTLAND, Ore. — Load posts on the spot truckload market closed the month of October on a high note, gaining 16% during the week ending November 3, according to DAT Solutions, which operates the industry’s largest electronic marketplace for spot truckload freight.

Sustained higher volumes during October is a sign that holiday freight is starting to move. The number of truck posts fell 8%, which helped lift load-to-truck ratios and led to an increase in rates after several weeks of declines.

Rates during the first three days of November were lower than October averages but were unchanged compared to the previous week: van, $1.79 per mile; flatbed, $2.12; and reefer, $2.09.

Rates increased on van lanes into the Northeast, including:

Spot flatbed rates dipped as volumes declined for the fifth consecutive week. The flatbed load-to-truck ratio averaged 10.8 in October, down from 14.7 in October 2018 and 37.5 in October 2017.

Christmas tree growers in North Carolina and Oregon, where six counties in the two states account for more than half of the 16 million trees harvested nationwide, are a big source of spot flatbed loads in November, but weakness from traditional sources—construction, oil and gas, machinery, agriculture—has caused the number of available loads to tumble.

Where flatbed rates were up: Houston, which averaged $2.30 per mile (down 7 cents), and other Texas markets have been hurt by a slowdown in oil and gas production and development. Key outbound lanes were lower:

Spot truckload activity starts 2021 at quick pace, according to DAT