For those unfamiliar with — or new to — the industry, it may be easy to assume that all truck-driving jobs are the same. In reality, the business of trucking offers a wide range of job functions that make it easy for anyone to find something that satisfies.

The following is a basic breakdown of the types of trailers and freight, and what drivers can expect when hauling them.

The basic “box,” or dry van, trailer is where many drivers start. The most common type of cargo is boxed freight, typically stacked on pallets or “slip sheets” and loaded by forklift. For the driver, this often means backing into an assigned dock and waiting for a forklift to take care of loading or unloading.

Sometimes the driver is asked to assist by counting freight, marking containers or even stacking boxes to make sure the quantity is correct for the load. Sometimes the driver loads or unloads the trailer by hand or pays a “lumper” to get the job done.

Some carriers have a lot of customers that require help at the dock, while others offer a large percentage of “no touch” freight. It’s common for a carrier to maintain a pool of trailers at a customer facility. This allows the driver to drop a loaded trailer in the lot, where a yard tractor can bring it to the dock later. The driver simply hooks up to an empty trailer, often on the same lot, and moves on to the next pickup.

When a van trailer is equipped with a refrigeration unit, the chances of handling freight or being delayed can increase — but so can the opportunity to find a load. Usually known as “reefers” but more properly called “temperature controlled,” these trailers can haul freight that’s frozen or refrigerated, freight that needs protection from freezing in winter months, or standard freight that needs no temperature control at all.

When temperature control is necessary, the driver is responsible for monitoring the load temperature, fueling the tank and reporting any issues. The weight of the refrigeration unit, fuel tank and accessories can reduce the weight capacity of the trailer.

Some drivers opt for flatbed or “open-deck” work. Flatbed trailers can haul items that are too large or heavy to place in van trailers, but it’s important to note that the loads must be secured and protected properly. Drivers need to understand whether to use chains, straps or a combination of the two to secure the load. These securements must be checked periodically to make sure they haven’t come loose during travel.

Drivers use tarps to protect the cargo against weather and other hazards. Securing and tarping the cargo can add work to the driving job, but many flatbedders say they wouldn’t have it any other way. Some trailers are equipped with side kits so a tarp can be pulled over the entire trailer. There are also tarping systems that store against the front of the trailer and expand accordion-style when needed to cover the entire trailer.

The customers served by flatbed drivers are often located away from industrial centers and populated areas, offering the chance of less-crowded highways — another plus for some drivers.

Open-deck trailers come in multiple configurations. A drop-deck trailer, as the name implies, has a lowered portion of the deck capable of handling taller cargo. A double-drop can have three different levels, while a reticulated gooseneck (RGN) trailer is another variation that’s capable of hauling extremely heavy loads.

Drivers who prefer a minimum of physical labor when it comes to freight have a couple of options. Dump trailers are relatively easy to load and unload and can haul a wide variety of products, from dirt and gravel to food-grade products and everything in between. Most of these trailers dump their contents by raising up the front of the box and letting the product slide under the tailgate, but there are variations. Hopper-bottom trailers are often used for grain, and walking-floor trailers actually unload themselves.

Dump trailers require some additional responsibility from the driver, who must ensure that tailgates or other openings are properly secured and sometimes must cover the cargo with a tarp. Depending on the application, dumping the trailer can be an adventure. When the front of the trailer is high in the air, the unit is extremely top-heavy and can tip over on uneven terrain or even because of windy conditions.

Tank trailers can also help reduce driver workloads — but they come with hazards of their own. Many liquid cargos such as petroleum products and chemicals are hazardous materials, requiring a hazmat endorsement and some special handling.

There are also requirements for tank trailers to be washed out after certain cargos in order to prevent a reaction between a new product and remnants of the old product still in the tank. Hauling food products can require that the trailer be sanitized between loads to prevent contamination.

Hauling tank trailers can be treacherous for several reasons. Most have a high center of gravity, making it easier for them tip over in a curve or turn. Liquids can also slosh, or “surge,” riding up higher on one wall of the trailer during a turn or creating a wave that can hit the front or rear with enough force to physically move the tractor-trailer unit, especially on slippery roads.

Drivers who pull tankers learn quickly to slow down on curves and ramps and to accelerate and brake as gently as possible.

Pneumatic tankers are used for dry, powder or granular products such as sand and sugar, as well as plastic beads used for injection molding, popcorn and more. They work by trickling the product into a strong stream of air, which carriers it into silos or other receptacles.

Specialty trailers haul cars, boats or other vehicles, sheets of glass and other cargos. Each has its own characteristics and cautions.

Drivers who enjoy the road but want a change from their current job will find a wide variety of opportunities in the trucking industry. 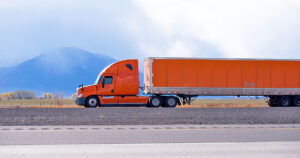