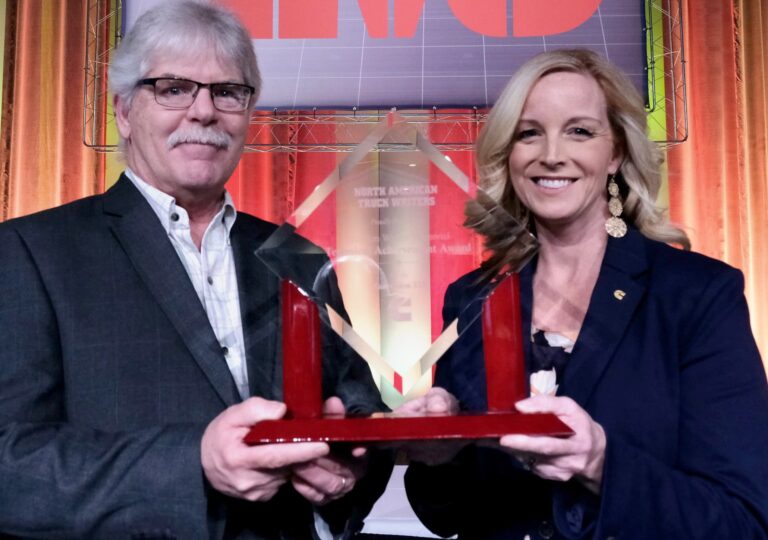 The honor was presented recently by a group of trucking news writers during the American Trucking Associations Technology & Maintenance Council meeting.

“As in previous years, there were a number of very worthy candidates nominated by members of our awards committee, and debate was lively,” said Jim Park, chairman of the Award Committee who writes for Heavy Duty Trucking and Today’s Trucking magazines. “But in our voting, the X12 emerged as the top product from a final field of four.”

The runners up were the Peterson Pulse electronic system for trailers, Stemco’s automatically deploying Trailer Tail and the Stemco-Webb Trifecta wheel hub.

Weight is always an issue in spec’ing and operating trucks, especially with bulk haulers and in vocational applications, and the X12’s comparatively low weight, along with millions of miles of previous service in Asia and South America, make it a standout among diesel offerings, members of the awards committee agreed.

The 11.8-liter X12’s dry weight is 2,050 pounds, 150 to 400 pounds less than 11- to 13-liter competitors, yet it makes up to 500 horsepower and 1,700 pound-feet of torque, according to Cummins. Innovative engineering trims pounds from the cylinder block but maintains high strength for long life, while advanced combustion design and effective air and fuel handling and promises high efficiency.

The X12 went into North American production and became available to customers in 2018, which made it eligible for the latest Technical Achievement Award, Park said. The engine is now an option from Autocar, Freightliner and Western Star.

Cummins, the industry’s sole independent engine manufacturer, won the award twice before, in 2017 for its X15 Efficiency Series diesel, and in 1998 for its Signature 600 diesel. In 2007, Cummins Filtration earned the award for its Fleetguard User Friendly filters.

The Truck Writers of North America, predecessor to today’s Award Committee, gave the first Technical Achievement Award went to Grote Industries for its red LED marker lamp, a technology that has become standard on trucks and trailers and across the automotive world.

Two years ago, the committee named the award after the late Jim Winsor, a 50-year veteran of the trucking trade press. He served as editor-in-chief at Commercial Carrier Journal and executive editor at Heavy Duty Trucking, and was active in the Technology & Maintenance Council and its forerunner, The Maintenance Committee.