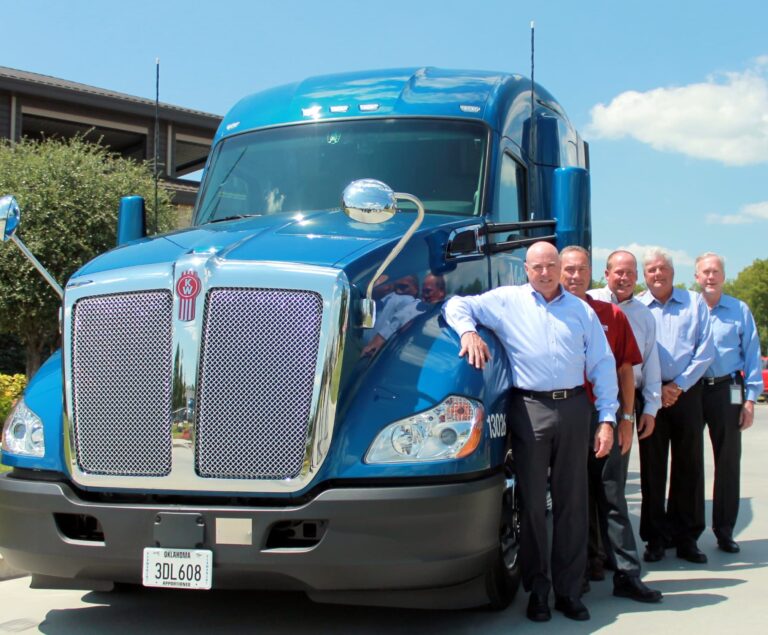 “The number 5,000 is daunting when you consider that truck No. 1 – a Kenworth T600 – was delivered to Melton many years ago,” said Kevin Baney, Kenworth assistant general manager for sales and marketing, who presented the new T680’s keys to Peterson.

According to Peterson, the historic milestone truck is a little hard to believe for someone who began his career as a company truck driver for CFI in 1985 – behind the wheel of a Kenworth T600. CFI was the first fleet to take a T600 delivery that year.

“I don’t think I could have dreamed that I’d be standing here – nearly 35 years later – with the 5,000th Kenworth under my ownership,” Peterson said. “But, I knew back then I wanted to become a fleet owner. I went to work for CFI and Glenn Brown, who was the CEO. He was my mentor and good friend. I started as a driver to understand the business, and in 1989 I formed GlasTran and was the proud owner of a glass hauling company with 30 leased trucks. The first trucks I bought were Kenworth T600s – 10 of them from MHC Kenworth.”

Peterson purchased Melton Truck Lines in 1991 and continued to grow with Kenworth and MHC Kenworth. Melton Truck Lines has been a leader within the flatbed industry for 65 years, serving customers from coast-to-coast, as well as in Canada and Mexico.

“Over the years, we’ve operated all the Kenworth fuel-efficient, aerodynamic models – such as the 1,400 Kenworth T680s we run today – and they’ve kept improving,” Peterson said. “The positive way our drivers have viewed Kenworth has never waned. We have always spec’d the trucks nicely and the fleet age averages less than two years old. I would not have our drivers in a truck that I wouldn’t want to drive myself.”

The 5,000th Kenworth T680, spec’d with a 76-inch mid-roof sleeper, features the complete PACCAR Powertrain with a PACCAR MX-13 engine rated at 455 hp, PACCAR 12-speed automated transmission, and PACCAR 40K tandem axles. The T680 is specified with Kenworth TruckTech+ Remote Diagnostics and driver comfort features include the stowable upper bunk, auxiliary bunk heater, drawer-style refrigerator and freezer, and television installation package. Melton was among the first fleets to put the fuel-efficient T680 to the test upon its introduction, and the T680 quickly proved itself to the company’s management and drivers.

“It is a special honor and exciting to be assigned to this milestone truck,” said Sam Hill, who has been a driver with Melton Truck Lines for nearly 10 years and is nearing 1 million miles driven for the company. “I love Kenworths and I’m looking forward to getting this new Kenworth T680 out on the road.”

“We’re important to each other,” he said. “And that’s the way it should be. But ultimately, you also have to look at the metrics, and we do. It’s the sales price and resale value, fuel economy and vehicle weight, cost of maintenance, and how drivers respond to the truck. If Kenworth didn’t come out at the top of the class, we wouldn’t be here to celebrate this milestone.”