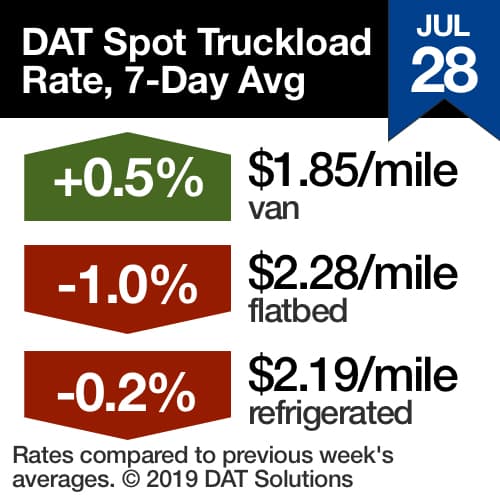 PORTLAND, Ore. — After a 16% drop the previous week, spot truckload freight volume fell another 8% during the week ending July 28, according to DAT Solutions, which operates the industry’s largest network of load boards.

Higher load volume out of California prevented further decline, as the availability of summer produce soaked up van and refrigerated truckload capacity and kept trucks busy with longer hauls.

Nationally, the number of available trucks dipped 1.6% compared to the previous week. Average spot rates remain below June levels but ahead of May.

Van volume slipped 2% last week, and 68 of the top 100 van lanes had lower rates. However, Los Angeles volume jumped 6% and produce is running strong from the San Francisco and Fresno markets, although sufficient capacity is dampening the rate impact.

The average outbound van rate from Seattle regained 3 cents to $1.43/mile, with two lanes up nicely:

Volume rose 4% nationwide and rates were higher on 35 of DAT’s top 72 reefer lanes. The San Francisco market, which includes the berry-producing areas around Salinas, California and Watsonville, California, has been a standout for summer produce. Last Friday, the load-to-truck ratio there hit 20.4.

Load volume from Sacramento, California, jumped 12% compared to the previous week and the average outbound rate was up 8 cents to $2.86/mile. The number of reefer loads dropped sharply in U.S.-Mexico border markets, with Nogales, Arizona, plunging in both rates (down 15 cents to $2.01/mile) and volume. McAllen, Texas, lost volume but the average outbound rate held at $2.13/mile.

Spot flatbed rates normally peak in the second quarter, but this year they hit their high mark in early July. Since then the national average rate has slipped 3.5%.

Load volume from Jacksonville, Florida, increased 22% last week and the average outbound rate was up 12 cents to $2.58/mile. Las Vegas rose 5 cents to $2.80/mile on a shift from north to south California shipping.