CUPERTINO, Calif. — Autonomous truck developer Plus announced in a September news release that it is already delivering autonomous rigs to customers in the United States.

The trucks are still required to have a back-up human driver aboard for safety, however.

Shawn Kerrigan, Plus’s COO and co-founder, said in a news release that autonomous trucking has many benefits, including helping the environment through cleaner-burning natural gas powerplants.

“Fueled by health and environmental concerns, policymakers are cracking down on pollutants emitted by medium- and heavy-duty commercial vehicles,” the news release said. “Shippers, too, are looking to integrate more efficient vehicles into their fleets, with the goal of cutting fuel costs and meeting increasingly stringent sustainability demands from consumers, investors, and regulators.”

Nationwide, 29% of all greenhouse gas emissions comes from trucks carrying freight, according to the news release. In California, heavy-duty trucks emit nearly one-third of all nitrogen oxide pollution, as well as more than a fourth of all diesel particulate matter.

“Plus has shown in its pilot programs that PlusDrive can help fleets save around 10% in fuel costs. This is due to AI-generated algorithms that teach the truck how to control itself in the most fuel-efficient way,” the company said in its news release.

“The collaboration between Plus and Goodyear enables us to leverage both companies’ innovative fuel efficiency technologies, and harness these to further improve the performance of autonomous trucks,” Kerrigan said.

Starting next summer, Plus will partner with Schmidt Futures-supported Good Machine venture studio on a pilot program to extend both company’s sustainability impacts.

“Through a pilot project, trucks automated by Plus’s autonomous driving technology will help move equipment used for Good Machine’s efforts to address wildfires, food insecurity, illicit wildlife poaching, and illegal fishing,” according to the Plus news release. “The partnership launches with Plus’s autonomous truck hauling equipment from Winnemucca, Nevada, to South San Francisco, California, to be used for a wildfire detection project in California.”

That pilot will use stratospheric balloon technology to detect fires early and report them to relevant authorities to help reduce catastrophic damage. Over the course of the next year, Plus will move other types of equipment for Good Machine sustainability projects.

The vehicles, to be released into the market in 2022, integrate PlusDrive with Cummins’ natural gas engine. The engine reduces smog-forming emissions by 90% compared to current EPA standards for nitrogen oxide air pollutants, according to Plus.

Kerrigan said the partnership “will enable us to accelerate our commercial deployment and magnify the impact of our autonomous driving technology.”

Trucks powered by diesel and automated by Plus’s Level 4 autonomous driving technology are being delivered to customers already, Plus’ news release stated. Additionally, Plus’s partnerships with Cummins and truck manufacturer IVECO will put PlusDrive-equipped trucks powered by natural gas on the road starting in 2022. 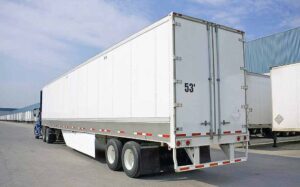 U.S. trailer orders grow, though still down from 2020