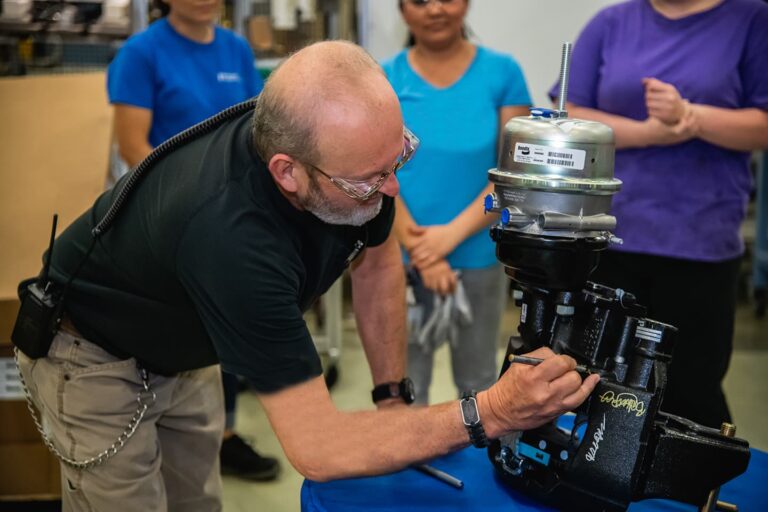 In a news release, the company attributed the milestone to “rapid, widespread adoption rates plus increased realization of performance, uptime and return-on-investment advantages.”

“Bendix Commercial Vehicle Systems and Dana Commercial Vehicle Products had only formed the joint venture Bendix Spicer Foundation Brake (BSFB) about a year before we started producing the ADB22X back in 2005, but we knew we were on the verge of changing the North American commercial vehicle landscape,” said BSFB’s Nicole Oreskovic, product line director for air disc brakes. “Air-disc-braked trucks had been the European norm for years, and we were excited to pioneer their advantages on this side of the Atlantic. Fourteen years of research and development, optimization, sustained fleet adoption, and road-proven ROI later, we couldn’t be prouder of how our air disc brakes have helped make vehicles and roadways safer, and we’re excited about building on its legacy as we continue to improve Bendix safety technologies.”

Oreskovic  said since its launch, the ADB22X has addressed the commercial vehicle industry’s need for reliable, high-performing, and high-value air disc brakes, delivering a lightweight design that provides shorter stopping distances than drum brakes and extended brake system life. As fleets and owner-operators realized its performance and maintenance benefits, demand for the ADB22X grew: It took eight years for BSFB to reach the 400,000-unit production mark in 2013, but just five more to hit the 2 million mark in December 2017, she said.

More than 25 percent of North American new builds for Class 6-8 air-braked wheel-ends are now equipped with ADBs – a 100 percent increase in overall market share since 2014 – and the Bendix ADB22X accounts for about 80 percent of that share.

The ADB22X has been standard equipment on the steer axle of all Peterbilt and Kenworth Class 8 tractors since 2013, and has since been made standard on all wheel-ends of Peterbilt’s Model 579 and the Kenworth T680. International Trucks’ LT Series, along with a number of their vocational models, also equips the brake standard on all axles.

The Bendix ADB22X™-LT air disc brake, engineered specifically for trailers, is available at all major trailer manufacturers and is the preferred ADB at Utility Trailer.

The BSFB facility in Bowling Green has undergone several growth phases as a result of the escalating industry demand for the ADB22X and Bendix’s continuous commitment to supporting fleets, owner-operators, and manufacturers with ADB technology.

Oreskovic said Bendix continues to invest in resources to advance, manufacture, and support air disc braking systems. Over the last three years, the company has doubled the size of its North American-based engineering team, adding employees in research and development, as well as technical and field support. Bendix has also substantially increased its testing capabilities and capacity.

Bendix wheel-end solutions include air disc and drum brake systems, automatic slack adjusters, spring brakes, friction, and remanufactured brake shoes that provide lower total cost of ownership while delivering on safety, stopping power, and reliability. BSFB helps fleets and drivers in the areas most critical to their success by improving vehicle performance and efficiency, and backing its products with unparalleled post-sales support. By strengthening return on investment in the technologies that improve vehicle and driver safety, BSFB supports safer North American roads for all who share them.