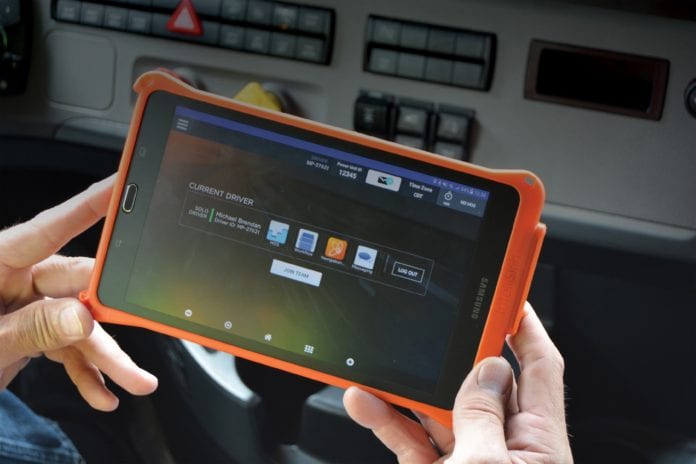 Since Schneider assigns the driver and not the truck, every Schneider driver has everything needed — from apps to news to delivery information and bonus pay statements — at their fingertips. (Courtesy: SCHNEIDER)

It is a leader in utilizing new technology to improve driver experiences.

Since it became the first company to incorporate two-way satellite communication systems in cabs in 1988, Schneider has been an early adopter of many technology developments.

Most recently, the company began rolling out Samsung Galaxy tablet devices to its drivers to make their lives easier both in and out of the truck, according to Mark Rourke, executive vice president and chief operating officer at Schneider.

Since the tablet is assigned to the driver and not the truck, every Schneider driver has everything he or she needs — from apps to news to delivery information and bonus pay statements — at their fingertips.

“I like that I don’t have to write everything down — like pick up numbers and customer info. It’s all right there for me, so I don’t have to go to a truck stop to do that paperwork,” said Schneider driver Shawn Calloway. “I’ll admit, I was hesitant at first, but it’s been a great portable tool that lets me streamline my work so I can get back on the road.”

Tablets also lay the foundation for future capabilities such as electronic signatures and transfer of documents, Rourke said, adding that as the technology evolves, Schneider is committed to the enhancement of the driver experience and will quickly accommodate additions and changes to the suite of new system tools.

“We have upgraded the in-cab communication system and provided new capabilities outside of the truck for drivers,” Rourke said. “We’ve listened and heard from drivers on how tablets are difference makers in making their lives easier. Putting technology in the palm of a driver’s hand is one of many ways we’re enhancing their experience.”

Testing of tablet-based solutions began in early 2015 with a pilot group of Schneider drivers who trialed the tablets alongside the current in-cab system. The resulting feedback noted their improved experience and elimination of the irritants of the previous processes, namely paperwork.

“It’s like an electronic Swiss army knife,” Rourke said. “All the tools and apps like MyPilot, Weigh My Truck, and Schneider’s Compass are in one easy-to-use place for drivers.”

Drivers are also using the tablets to:

Those interested in learning more about Schneider’s easy-to-use tablets and finding jobs with a company focused on improving the driver experience can visit schneiderjobs.com.