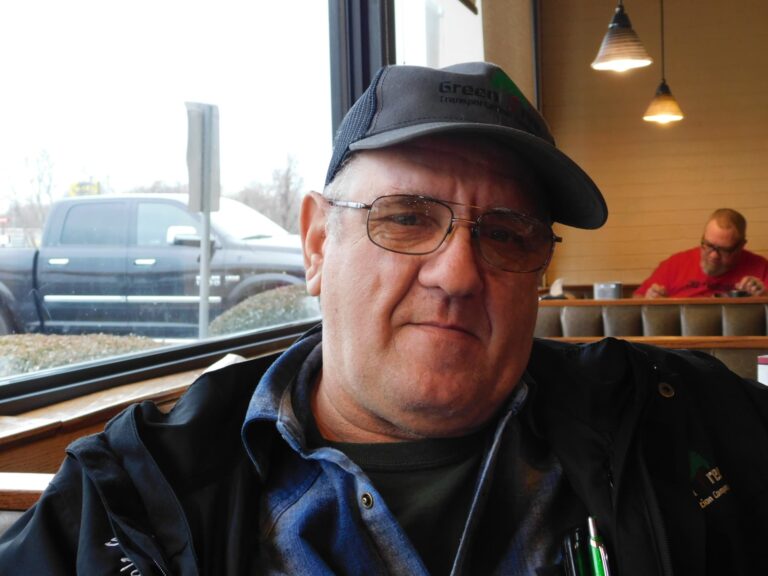 One of the most accurate measures of how much a fellow’s age has distilled into wisdom is the degree to which he has learned to make life easy on himself. It can be in the way he does his job, knowing the best routes to take, the best places to stop. And it can show itself in the way he takes in the world.

At the age of 63 and with 45 years on the road, Tim Plubell has a personality as mellow as if it had been aged in an oak cask. On January 2, he was having breakfast at the Iron Skillet at the Petro Stopping Center off Interstate 40, exit 161, The Trucker’s favorite haunt for meeting drivers.

Plubell was a bit amused.  He said he’d read something on the internet about someone trying to organize a truckers’ shutdown for one reason or another.

“I thought, I do that every few weeks,” he said. “Whenever I go home I shut down for a week. I’m able to do that now.”

Home for Plubell is Frenchville, a little community of about 500 in central Pennsylvania. He was headed back east after dropping off a load in Oklahoma City. That’s about as far west as he goes anymore, he said. In 2019, he’ll have been an owner-operator for 20 years, and he wouldn’t have it any other way.

“I work for myself, I do what I want to when I want to,” he said. “Mainly I just like being out by myself. I’m kind of a loner person.” But as he sees it, that’s one of the qualities that makes a person suited for trucking. It’s suited him his entire working life.

“I’ve been driving since I was 18,” Plubell said. “I started driving a log truck for my uncle.” He continued doing that until his uncle retired and closed his business. From there, Plubell became a company driver until 1999, when he was able to buy a truck and go out on his own.

He’s always liked the driving life, but it’s best as an owner-operator. “I got nobody breathing down my back; I got nobody forcing me to do anything I don’t want to do. That’s what I like about it.”

The only down side, as he sees it, is the amount of time he has to spend away from home to make the money he wants to make. Take this past week, for example. He was home for Christmas, but then he left the day after, and he and his wife wound up spending New Year’s Eve apart.

But even that cloud has a silver lining, he explained. A lot of relationships might be strained from spending so much time apart. Not so for Plubell and his wife, who got married about a year after he started driving for his uncle.

“When I started driving it was good for a while,” he said, referring to married life. “I was home every night. But then … being we got married young, we began fighting about a lot of stuff.” Money was the most frequent topic of conflict, as he recalls, as the young couple struggled to adapt to adult responsibilities.

“So, then I got the opportunity to go over-the-road,” he said. After that, “everything got a whole lot better. The money issues went away, and then we got along better.”

It wasn’t just the money, he said. The time apart made them value the time together even more.

Plubell said he tries to get home every weekend, though it doesn’t always pan out. That’s why he doesn’t venture any farther west than Oklahoma City. And except to get home to Frenchville, he pretty much confines his driving to the Southeast this time of year. Driving in northern winter weather isn’t worth the hassle.

It’s not that he doesn’t trust his own ability. It’s the other drivers out there, the amateurs. “Ninety percent of them that pass you are on this,” he said, holding up his cellphone.

After 45 years, he has a spotless accident record, and he’d just as soon keep it that way.

Aside from sharing the road with drivers who seem to be getting more distracted and discourteous as the years go by, the one other thing that Plubell thinks has gotten worse over the years has been all the regulations truckers have to contend with now.

“I mean, there’s a lot of pros and cons about this ELD that’s come out,” he said. “Me, I don’t mind it. It doesn’t bother me, I can work with it.” But like with a vast majority of drivers, the problem is the rigidity of the rules the ELD is there to log.

For example, a couple of months ago he was making his way home and he hit one construction zone after another. As a result, his clock ran out about 15 minutes from home. Now, in the old days, a driver could say, what the heck, drive the extra 15 minutes, massage the log entry, and who did it hurt, really?

Instead, he had to park the truck, call his son to come get him, and then go back the next morning and get his truck. What sense does that make?

Plubell doesn’t know if he’ll ever fully retire. He has a friend who’s little older than he is who has become a little choosier about how far and how often he drives, and he figures he might follow that example.

Trucking isn’t for everyone, he said, but when it is, it’s tough to imagine not ever doing it.