TOPEKA, Kans. — Goodyear Tire and Rubber Co. has come under heavy fire this week after a photo of a slide purportedly shown during a training session at the company’s Topeka, Kansas, plant was widely circulated on social media.

The photo, taken by an employee at the plant, was sent to 13WIBW, a Topeka news station. Shortly afterward, Goodyear responded with a tweet stating “the visual in question was not created or distributed by Goodyear corporate, nor was it part of a diversity training class.” The tweet goes on to note that the company asks its associates to “not to engage in political campaigning of any kind in the workplace — for any candidate, party or political organization.” 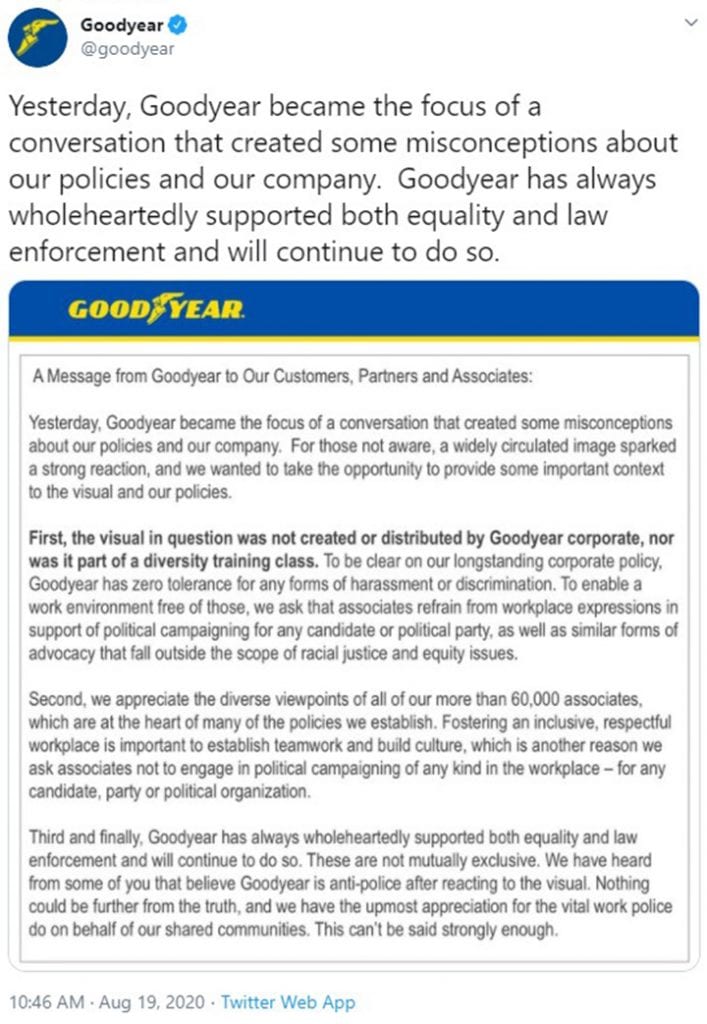 According to an Aug. 19 article posted on Snopes.com, an online fact-checking resource, the image was originally posted by an employee of the Kansas plant, who said the slide came from the company’s corporate office in Akron, Ohio. Snopes states that it has “reached out to Goodyear to clarify details about the image’s origins” and that information on the Snopes website will be updated “accordingly.”

In the recording, an unidentified speaker states, “Some people may wish to express their views on social justice or inequity or equity issues such as black lives matter or LGBTQ pride on their face coverings, shirts or wristbands. That will be deemed approved because it applies with a zero-tolerance stance. However, if any associate wears all, blue, white lives matter shirts or face coverings, that will be not appropriate.”

While the speaker does not specifically refer to MAGA hats, he does note that political campaigning on the job is not acceptable: “Democrat. Republican. Trump. Biden. Sanders. Whatever. That will no longer be allowed in the plant.”

What happened to your 1st Amendment rights?

Bunch of liars , blm is ok but Blue Live matters is not.
BOYCOTT All Products made by Goodyear .
Americans remember COOPER tires are made in the U.S.A