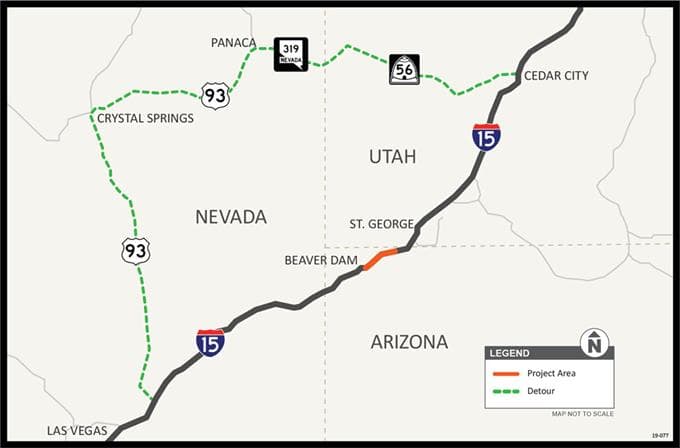 Construction detours are never welcome. But at least in developed areas they won’t take you too far out of your way. When they happen in more remote areas, you can be forced to take the scenic route.

That could be the case for some truckers using the busy Interstate 15 corridor over the next year. I-15 only runs for 29 miles as it cuts across the northwest corner of Arizona, but bridge work in a three-mile section of that span will send some drivers will send some drivers on a 229-mile detour, bypassing the state altogether.

Starting May 29, crews will begin resurfacing work on two bridges that run through the Virgin River Gorge between St. George, Utah, and Mesquite, Arizona, while a third bridge will get a whole new deck. The $6.4 million project is expected to take until spring 2020. During that time, traffic will be reduced to one lane in either direction, with traffic diverted to one side of the freeway while work is done on the other. The lane shifts will be in effect 24 hours a day.

The Arizona Department of Transportation (ADOT) is advising that all drivers planning on taking I-15 to expect delays. They also put out a notice that the temporary lanes will only be 10 feet wide, which means any vehicles or loads wider than 10 feet will have to take the 224-mile detour, with signs directing wide-load traffic to US 93, Nevada State Route 319 and Utah State Route 56 between Las Vegas and Cedar City, Utah.

In all, the detour will add a net 67 miles to the route.

According to ADOT’s figures from 2017, the latest year for which the statistics are available, the number of vehicles that use I-15 varies, depending on location. Near the Nevada state line, an average of 27,221 vehicles use the highway per day, of which 22.3% are trucks. In the Virgin River Gorge area, an average of 19,000 vehicles per day use the highway, 26% of which are trucks.

For more information on the project, visit azdot.gov/projects and click on North Central District.