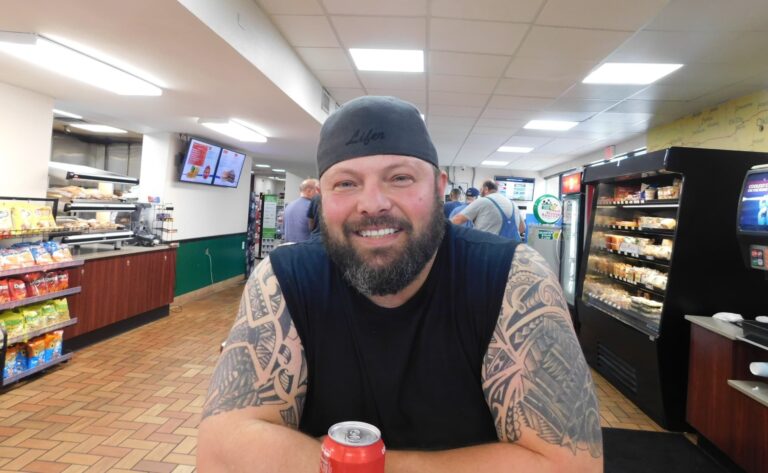 Seeing Ray Shamel standing in line at the Petro truck stop off Interstate 40, exit 161, near Little Rock, Arkansas, you could almost mistake him for a professional truck driver. He looks the part. And he’s obviously at home at a truck stop.

Then again, he’s got a little more pep in his step, he’s a little less bedraggled than most truckers are as they take care of business and life’s necessities. He’s quick to smile and to start a conversation wherever he finds one. He’s relaxed rather than weary.

There’s a simple explanation for the similarities and the differences, and he’s happy to reveal it.

“I’m an expediter,” he said with a wide grin, as though he had just revealed a plot twist to a mystery. He’s a professional driver, all right, but instead of a big rig, he drives a sprinter-style van for Barrett DirectLine Expedited Service, based in Bentonville, Arkansas.

“I haul small freight,” Shamel said. “I can haul up to three skids.” When someone has a small load that has to get somewhere quickly, that’s the niche expediters like Barrett fills, anywhere in the Lower 48, although, “usually we stay in the freight lanes, normally east of the Mississippi, mostly.”

Shamel has been driving for Barrett for about a year. Before that, he’d driven a straight truck near his home in Davison, Michigan, a suburb of Flint about 65 miles north-northwest of Detroit.

“I always liked driving, but my kids were young and at home, so I stayed at home and worked local until my kids were grown,” he said. “So now I decided to get out and see the country, drive and make money doing it.”

The way Shamel describes it, with expediting, he enjoys the best aspects of long-haul driving without a lot of the headaches. Take all that angst about Hours of Service, especially since ELDs became mandatory. Shamel has been following the issue, though none of it applies to him.

“We manage our own time, so we’re more able to stop where we want,” he said. When it is time to stop, he doesn’t have hunt for parking like he would with an 18-wheeler. His van has a pulldown bed, so he can get a room or just park somewhere.

“If I want to pull into a roadside park and get some sleep, a truck may not be able to get in, but I can do that.”

Ask almost any driver about the best aspects of being an OTR driver, and they will tell you it’s the chance to see the country.

“In a van, you can get more places that you want to see,” Shamel said. “Let’s say I’ve got a delivery near Niagara Falls, and I’ve always wanted to see it. Once I drop that, I go out of service for a day or 12 hours or whatever, I can go, take a look, take some pictures, enjoy myself, enjoy my day.”

Or suppose he’s out West and wants to take a short detour and see the Grand Canyon. Would he be able to maneuver those narrow, winding national park roads in a semi?

No driver likes to deadhead, but with his fuel costs being just a tiny fraction of what it would be driving a tractor-trailer, it’s not as big a deal if he decides he doesn’t want to wait to get home.

Like any driver with a family, being away from home can be the most depressing downside of the job. Shamel is out on the road for three to four weeks at a time. But he and his wife have more quality time now that he’s on the road.

“When I was working a regular job at home, I was driving long hours,” Shamel said. “I’d get home, my wife worked third shift. I’d get home either right after she left for work or right before she left. And then she’d be gone all night. We had to fight for moments to have time together.

“Now that I’m an independent contractor running through a carrier, I’m able to come in and go out of service whenever I want. If my wife says, ‘I have a two-week vacation in June, do you want to do something?’ we can book a cruise. I’m able to work it round her schedule now so every moment that she has off, I’m able to be there with her.”

Expediters have a tight community out on the road. Shamel belongs to Facebook group called Transportation Life: Wheels, Wings and Rudders, They number about 3,000 members.

“It’s like having this huge extended family of fellow expediters,” he said. So even though you’re away from home, you have friends that are out here. We’re able to meet up, you know, have dinner somewhere.”

It’s a nice feeling to pull up somewhere and see a couple of vans. “There’s a lot of women out here who are solo,” he said. “If they’re in an area with other members of the community they might feel safer.”

Then he added, honestly, it’s comforting even if you’re a guy to know you’re among friends.

Shamel had been sitting in Little Rock and had just gotten a call. In just a couple of minutes he’d be heading out to pick up a load to take to Louisville, Kentucky.

After that? Who knows, but that’s part of the fun.