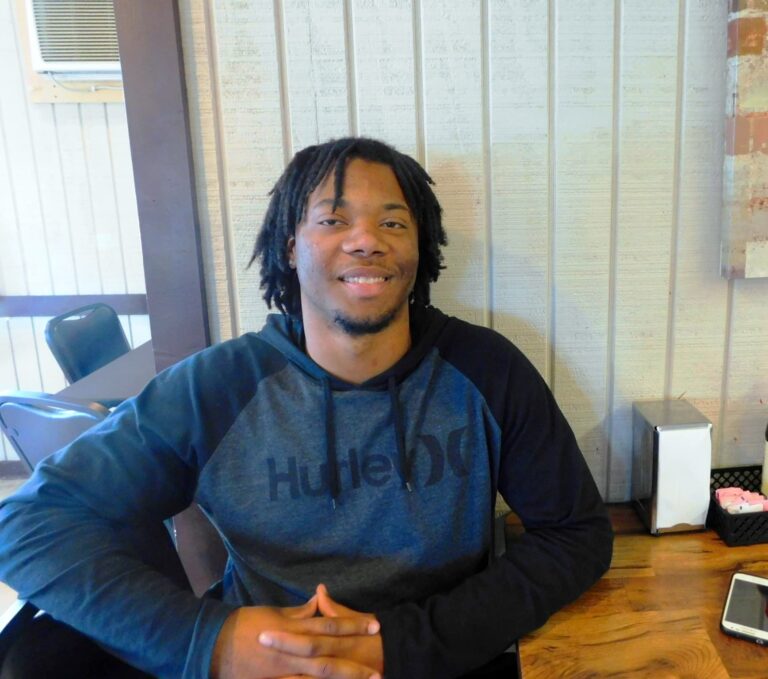 In the running debate over whether professional truck drivers under the age of 21 should be allowed to run loads interstate, one of the main arguments made by those who are opposed to the idea is that young people lack the maturity to handle the job, that they just aren’t serious-minded or responsible enough. Then there’s the old classic, “These kids today, they don’t wanna work.”

That may not be true about a lot of young adults, but not all of them. To borrow a phrase from Rod Serling, respectively submitted for your approval is one Mr. Kie-Aire Collins, a rookie flatbed driver for Western Express. He started driving for them last June, and at 23 he isn’t much older than those dreaded 18- to 21-year-olds that have some folks worried.

But to talk to him about his trucking career, he leaves the impression that he’s more than ready, willing and able to give his all to succeeding in the profession.

“I love it,” he said. It was just over a year ago that he gave up his job as a sewing machine mechanic at a factory that made shirts and jackets for the military and enrolled in Careers World Wide in Keenesburg, Colorado, near Denver, to get his CDL and go after his childhood dream. He’s wanted to be a truck driver for as long as he can remember, playing with toy trucks as a kid.

“I used to go on the road with my uncle a lot when I was a little boy,” Collins said. “He was an owner-operator for 20-plus years, so he’d seen it all.”

Collins said when he decided to go into trucking, his uncle’s advice was, “When you get in there, learn all you can.” CDL school was a great start for literally learning how to drive a truck, he said, and the school hammered home the importance of caution and safe driving practices. But in his nine months on the road, he’s found there’s a lot to be learned about living the trucker lifestyle.

“You don’t see home very often, but that’s OK,” he said. He’s usually out three or four weeks at a time, but It’s not like he has a wife and kids yet. And like so many drivers, one of the great perks of the profession is “you get to travel and do it for free.”

Collins was born in Pine Bluff, Arkansas, was raised in Memphis, Tennessee, and now calls Little Rock, Arkansas, home. He hasn’t seen the whole country yet, but he’s already seen a lot of it. The thing that strikes him is how every city has its own unique personality. So far, he’s found a lot of places along the East Coast that he likes. He could see himself living in Florida. He likes Delaware, too. Philadelphia is beautiful, as is Massachusetts — really anyplace where you can see the Appalachian Mountains.

“I like Colorado, but once you get in Denver it’s pretty hectic, the traffic,” he said. Not to mention the cold weather. No, he’ll stick to Florida. Or Texas — Texas is nice, too.

OTR driving takes some getting used to, he said. Having to think ahead about taking bathroom breaks was an adjustment, and he had to get used to the idea of not always having access to a shower.  “It’s tough. But it makes you stronger, too,” he said. “It makes you appreciate life more.”

Before he became a professional, Collins said, the longest he’d ever driven nonstop was between Memphis and Little Rock, a 2- to 3-hour ride, depending on traffic.

“Now, if I get a good night’s sleep, I can drive 11 hours straight,” he said.  “You can pull over if you want to, but once you get out there driving, once you get in that groove, the only time you want to pull over is for your 30-minute break.”

Because he wants to be fresh, Collins said he uses his 10 hours almost entirely to rest and “get my mind right for the next day.” He likes to get some exercise in when he can, but even when he can’t, he still manages to exert some energy.

“I do flatbed, so tarping and strapping loads down — flipping tarps, you got to be in shape,” Collins said. Those tarps can weigh over 100 pounds, and you can break a sweat just pulling those straps tight.

“And after that you have to start that driving.”

It can take up to an hour for him to secure a load, he said. But that’s how he’s met some veteran drivers. There have been several times when longtime flatbed drivers have seen him, spotted immediately that he was relatively inexperienced and have offered some helpful tips. And he’s been happy to learn from them.

Collins said for the most part, he’s found the veteran drives are pretty friendly. “A few of them act like they know everything, like he’s a super-trucker,” he said, but most, instead of acting like a know-it-all, will share some of what they do know with the younger guys.

“You’re in the same profession, so it feels like you’ve got something in common. It’s kind of like a brotherhood.”

No doubt, 20 or 30 years from now, some 18-year-old driver will be saying the same thing about him.