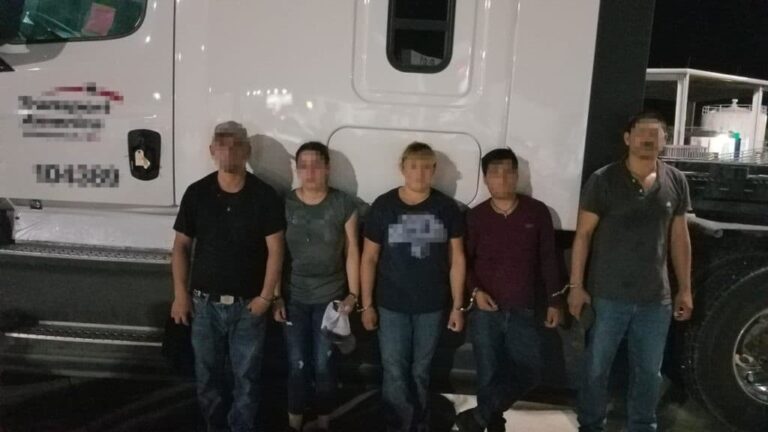 The incident occurred when agents encountered a white tractor pulling two additional tractors in the primary inspection lane.  While at the primary lane, a Border Patrol canine alerted to the odor of concealed narcotics and/or humans in the vehicle.  The tractor was referred to secondary for further inspection.

Agents discovered five individuals who were being transported in the middle tractor and five more in the last tractor.  Record checks on the 10 individuals determined they were nationals of Mexico and El Salvador in the country illegally.  Despite the heat of the Texas summer, the migrants did not require medical attention, according to information provided by Laredo Sector Border Patrol official.

They were all placed under arrest, along with the driver, a United States citizen, to be processed accordingly.  The tractors utilized in the human smuggling attempt were seized by the Laredo Sector Border Patrol.

Agents determined the driver of the rig to be a U.S. citizen and placed him under arrest for possible charges related to human smuggling. Officials seized all the tractor and both trailers.

Laredo Sector agents frequently find migrants being smuggled in tractor-trailers and other cargo trucks placing the migrants lives in danger from heat-related illness or injury in the event of a crash.

In May, a Laredo Sector K-9 alerted to another tractor-trailer at this same checkpoint, Breitbart News reported. An inspection of the trailer yielded 66 migrants who were locked inside with no means of escape in the event of a crash or abandonment by the human smugglers. Agents said the 66 migrants included two juveniles.

“The Laredo Sector Border Patrol will continue to warn against the dangers of people crossing illegally into the United States through dangerous environmental conditions,” Laredo Sector officials said in a written statement at the time. “Our Border Safety Initiative (BSI) is a humanitarian, bi-national strategy designed to reduce illegal alien deaths, educate and inform potential illegal aliens of the dangers and hazards of crossing the border illegally, and to respond to those who are in life-threatening situations.”