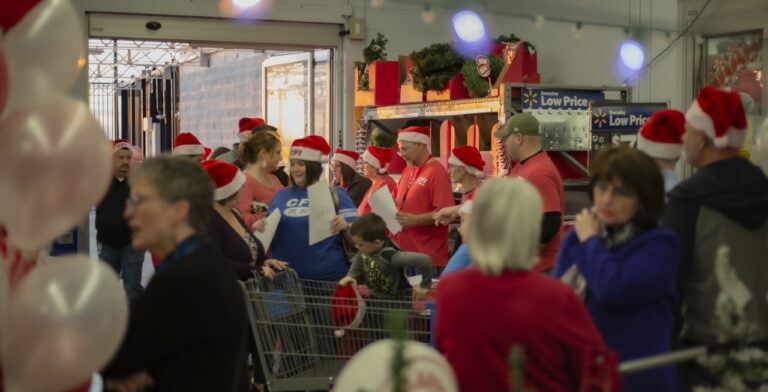 A longstanding tradition established in 1993 and unique to CFI’s family-friendly culture, Truckloads of Treasures starts in August with a seven-week raffle ticket fundraiser. CFI hosts activities throughout the year including book fairs to raise funds. Festivities accelerate in the fall with crowd favorites including “crock pot chaos,” a chili cook off, a silent auction and an ugly sweater contest.

The event culminates in shopping sprees across North America to benefit children and elderly in need during the holidays, typically during the first week of December. Over the 26 years of the program’s existence, CFI employees have donated over $880,000 with annual goals of raising $40,000. CFI has some 3,000 employees and independent contractors.

“This is one of the most inspiring events of the year for our company, our employees and the communities in which we live and work,” said CFI President Greg Orr. “Our employees embrace giving back, engaging with our communities to help those underserved and less fortunate. I’m extremely proud of our employees, and I appreciate the spirit, joy and commitment they bring to this campaign every year to help meaningful charities in Joplin and across North America.”

The campaign supported nine charities in CFI’s headquarters of Joplin. Early in December, some 200 CFI employees participated in the annual “Shopping Spree” at the Joplin Wal-Mart. Employees purchased over $21,000 in gifts and needed supplies, based on lists of items submitted by some 300 local underserved children and seniors identified by the Salvation Army.

At the Shopping Spree, the company also presented checks to local Joplin charities.

“With the parameters of supporting children and elderly in need, we find our terminals have long-standing partnerships with charities that have come to depend on our support,” Orr said.

Donations were raised through a company-wide raffle with prizes including gift cards for retailers such as Target, Best Buy, Lowe’s, Sam’s Club, Bass Pro Shops and Academy Sports and Outdoors, as well as other prizes. All prizes were purchased and donated by CFI’s executive management team. The raffle also included two special drawings awarding one- and two-weeks paid time off. Additional funds were raised through bake sales, a chili cook-off, book fairs and separate auctions of locally-donated prizes.

Throughout the year CFI places an emphasis on charities with ties to military veterans, first responders, the transportation industry, empowering women and education.

Orr said the company’s support goes beyond monetary donations and includes volunteering and support for events.

Some examples include a monthly dinner CFI sponsors at the Ronald McDonald house.

Another annual favorite is a Wreaths Ride to support Wreaths Across America.  Company employees who are avid motorcycle enthusiasts also support charitable causes by joining convoys that ride with CFI’s specially-wrapped theme trucks.

This year, following the devastating tornadoes in the Midwest, CFI also made a special contribution to first responder organizations, providing a $100,000 grant which was used by local agencies in four states to meet specific needs for firefighting and rescue equipment.

Orr said holidays offer another opportunity to support communities, with CFI employees participating in food donation drives. The trucking industry also has a unique opportunity to donate in-kind services with the gift of transportation.

Since 2015, CFI has been a national sponsor of Holy Joe’s Café, which supplies donated coffee to our troops in over 70 countries. The company donates between $50,000 and $100,000 a year of in-kind transportation, moving coffee supplies to military bases in the continental U.S., which are then shipped to soldiers overseas to give them a small taste of home.

“As a responsible employer, it is important to demonstrate you’re a good citizen of the community,” Orr said. “We recognize that those cities and towns in which CFI employees live and work need support, often for critical services that only charities can provide. We have a culture that embraces giving back to those who may be less fortunate, and we take pride in supporting important charitable endeavors. We believe we have the best employees and Independent Contractors in the industry, a quality which is reinforced every year when we have the opportunity to give back.”