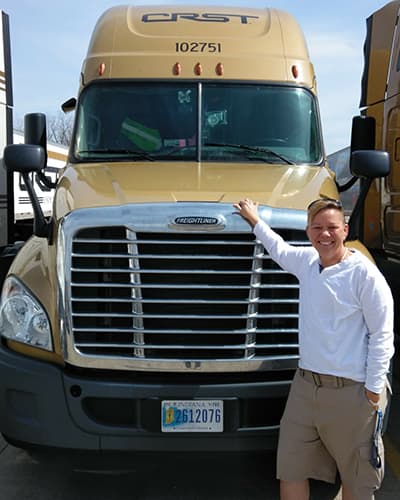 PLOVER, Wis. — Women In Trucking has named Robin Maisel as its 2019 October Member of the Month.

Since she was a little girl and heard the sound of the Jake brake, Maisel knew that she wanted to drive a tractor trailer. What she didn’t know is that one day she would be driving a truck and coming to the aid of another driver in an emergency situation.

At the end of March, Maisel had been driving with CRST Expedited for a little more than a year. She rushed to action and assisted another truck driver during an unexpected medical episode at a Love’s Travel Stop near Amarillo, Texas.

Maisel was parked and taking a DOT break when suddenly she saw another truck come flying into the fuel station. She witnessed the driver plow over a row of fuel pumps and the truck finally came to a rest when it hit the truck one space over from where she was parked.

Maisel saw that the driver of the truck had fallen over in his seat. Her instincts immediately kicked in. She utilized her 20 years of nursing experience and ensured the driver was breathing, checked his pulse and assessed his condition while she waited for the emergency medical technicians to arrive.

She stayed with the driver the entire time and corresponded with the medical team so they would know the next steps to take when they arrived.

Maisel is no stranger to unexpected medical situations, but nothing can really prepare you for when one of those situations hits home.

While working as a hospice nurse three years ago, she was diagnosed with breast cancer. She didn’t let that get in the way of her dream of becoming a truck driver, though.

As Maisel once told her colleagues, “I’m going to drive a truck one day.”

Now she is doing that and more. As a cancer survivor, Maisel loves to be out seeing the country. “It’s an adventure out here,” she said. “After what happened in March, I believe I am supposed to be out on the road.”

This driver was very lucky he crossed paths with Maisel on that day, as she had the training and skill to assist a fellow truck driver on the road.

“I was thankful the driver was not out on the interstate when this occurred,” she said. Thankfully, the driver was okay and proper medical action was taken. Maisel felt the driver may have been worn out and needed to take a break, which is very important for OTR drivers.

“We thank Robin for her quick reaction and helping another driver in need. She is a tremendous example for others and we are honored to share her story,” said Brooke Willey, vice president of human resources for CRST.