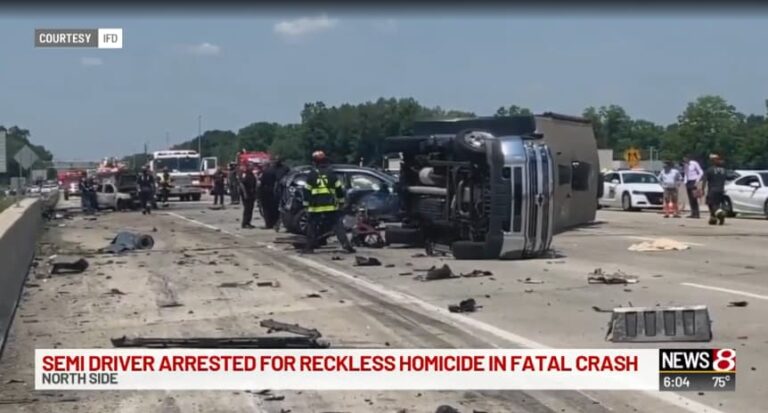 WASHINGTON — The driver of a tractor-trailer that collided with a back line of vehicles killing a mother and her twin children has been declared to be an imminent hazard to public safety and has been ordered by the Federal Motor Carrier Safety Administration not to operate any commercial vehicle in interstate commerce.

He was served the federal order August 2.

But not being able to operate a commercial motor vehicle in interstate commerce is the least worries for Bruce Andrew Pollard, who has been arrested and charged with three counts of reckless homicide, and one count of reckless operation of a vehicle in a highway work zone.

On July 14, Pollard, a commercial driver’s license (CDL) holder, was operating a tractor-trailer in an active work zone along Interstate 465 eastbound near Keystone Avenue in Indianapolis, Indiana, when his truck, traveling faster the posted speed limit, collided into the rear of a line of vehicles.  A fire erupted and the two young children and their mother were killed; seven other individuals were hospitalized.

A subsequent investigation by FMCSA investigators found that Pollard had a history of careless driving and had been disciplined and later terminated in April 2019 by his previous employer for repeated instances of unsafe driving.

In applying for his latest truck driving position in June 2019, Pollard failed to disclose his employment with the previous motor carrier, failed to disclose his termination and the reason for his termination.  Pollard falsely certified on his job application that he had not previously been involved in a crash.  It is a violation of USDOT/FMCSA regulations to make fraudulent or intentionally false statements on a federally required, safety sensitive, document.

FMCSA’s imminent hazard out-of-service order states that Pollard’s “blatant and egregious violations of [federal safety regulations], local operating laws … and ongoing and repeated disregard for the safety of the motoring public … substantially increases the likelihood of serious injury or death to you and the motoring public.”

Pollard also may be subject to a civil penalty enforcement proceeding brought by FMCSA for his violation of the Agency’s safety regulations.

I wonder if his truck was or not equipped with anti collission devices,if so,why didn t they work?
In Indy I am the only driver driving at 55mph, everybody,trucks and cars pass me at 60,65 mph and cars do 70 mph.
I don t set the speed limits,I only pay the fines if I disregard them,so I m8nd the speed limit,I work too hard for my money.