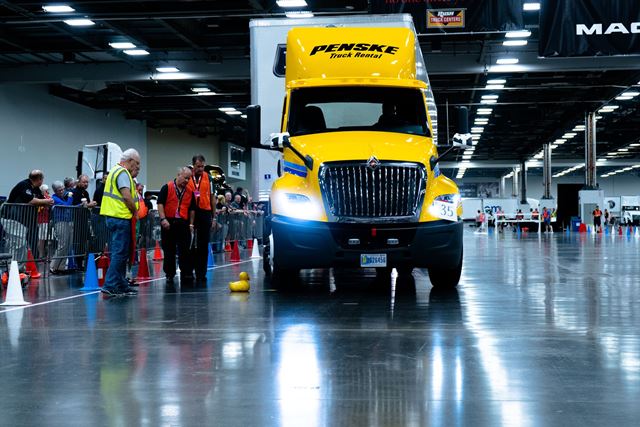 Some of the trucking industry’s best drivers — 424 men and women from all across the country — are putting their knowledge of the industry, safe driving ability and skillfulness to the test to see who will emerge as the 2018 National Truck Driving Championships Bendix Grand Champion.

“The trucking industry’s attention is turned to Ohio’s capital this week, where some of the country’s best drivers are competing for the trucking glory,” said ATA President and CEO Chris Spear. “It is a true testament to the entire trucking workforce that hundreds of truck drivers put in thousands of hours of driving practice and study in order to compete for the crown as grand champion. We can’t wait to see which drivers, companies and states emerge as champions on Saturday night and are thankful for all the effort that has gone into setting up this fun and friendly competition.”

NTDC action began Wednesday when drivers were escorted onto the course for a timed walk-through in which they saw the driving problems for the first time. Competitors also sat down for a written examination, which is one of the three scored phases of competition. Over the next two days, competitors will take part in a vehicle pre-trip inspection to test the drivers’ ability to detect vehicle malfunctions and a driving skills test where competitors are graded on their ability to operate a truck through a series of obstacles. The first round of competition wraps up on Friday afternoon.

Over four days, 424 competitors from all 50 states, including 28 “rookies” competing at any level of truck driving championship for the first time. The 424 competitors have a combined 693 million accident-free driving miles.

The driving competition is the main event, but NTDC attendees can also explore the course-side Exhibit Hall, test their driving abilities in the ATA Interstate One truck driving simulator, shop at the official NTDC Marketplace, and spend time with friends and colleagues in the industry.

Members of the media are invited to attend Media Day on Friday, when individuals can drive ATA’s Share the Road Mack Anthem through a mock driving course (with supervision from professional truck drivers) and learn more about the competition from past champions.